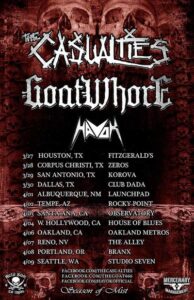 Goatwhore announces tour with The Casualties

New Orleans, LA natives Goatwhore will be embarking on their first tour of 2013 this April. They will be touring in support of punk legends, The Casualties, for a string of dates throughout the west coast and up to Texas. The first show is on March 27th in Houston.

Following those shows, Goatwhore’s co-headlining tour begins in on April 11th in Kelowna, BC with one of Canada’s finest metal exports, 3 Inches of Blood! The tour will swing back into the states for shows in the Midwest and on the east coast, including an appearance at New England Metal and Hardcore Fest XV. At the end of April, supporting acts Revocation and Ramming Speed will complete the lineup.

Goatwhore’s latest release, Blood for the Master, debuted on Billboard Magazine’s Top 200 Current Albums at #171. The album also debuted on the following Billboard charts: #4 on the Heatseeker (New Artist) chart, #12 on the Current Hard Music chart, #21 on the Hard Music Chart (overall**), and #31 on Top Independent Albums chart and hit iTunes Rock chart at #19*. Blood for the Master also hit charts in Canada, coming in at #142 on the Top 200 Current Albums chart, #18 on the Hard Chart, #1 on iTunes Metal*, #17 iTunes Rock*, and #152 iTunes Top 200*. (*iTunes numbers from street date – **chart includes catalog)

“Five albums in, Goatwhore still hold the crown as the hardest-working band in metal. With Blood for the Master, all of their sacrifices have finally paid off.” -Decibel Magazine

“draw on sludge, death and black metal without being easily classified as any of those” -Terrorizer Magazine

“If somebody could capture the speed of the harshest winds in the Antarctic they might come close to understanding the High Rocktane insanity of Goatwhore.” –CraveOnline.com 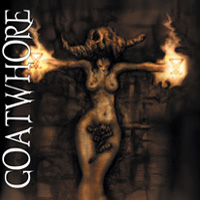 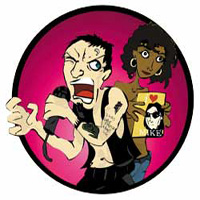