With all the bursting imagery of rousing sea shanty sing-alongs and pirate metal cheers, there’s just no excuse for a boring video.

“Downer Surrounded by Uppers” is more fist-pumping L7 yowl and Medicine fuzz, “Knelt” is a gorgeous sludge crawl, like Kylsea, or other plodding stoner doom. 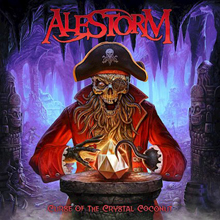 While it’s Alestorm on autopilot, “Fannybaws” is fine pirate metal. There’s a ship, beards, yo-ho-ho choruses, a blistering solo, and a midget. No wenches?

With last year’s release, there are now more Ihsahn solo records than there were Emperor records, so I think it’s safe to say the former Emperor frontman is committed to this new life of relentless experimentation.