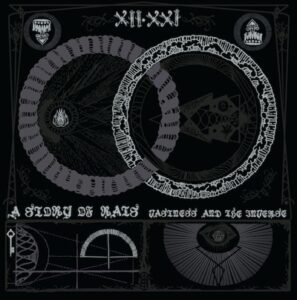 Revitalized heavy music portal Invisible Oranges has just posted a track from A Story Of Rats oncoming LP, Vastness & The Inverse. The site’s editor describes the song thusly: “Gothic ambiance with a touch of black metal is the focus of their latest effort, Vastness & The Inverse. Funeral-paced drumming, organ, vocals swallowed in reverb and noise squalls color the dirge-y, minimalist track “Her Teeth Are Nil,” available for streaming for the first time below.”

Druss’ second full-length, Vastness & The Inverse, will be entombed on 33RPM vinyl (limited to 300 copies) and offered up for consumption by Translinguistic Other in February 2013. Ethereal, ghostly sound compositions, buried vocals, howling winds, glittering blackness, ritualistic war drums, enveloped in fog…this is A Story of Rats’ most complex and illuminating work yet.

Its haunting artwork was created by Druss and hand printed by Broken Press. the record itself was recorded & mixed by Wolvserpent’s Blake Green in Seattle, WA, and mastered for vinyl by the inimitable James Plotkin.

Cvlt Nation has already heaped praise upon ASOR’s entrancing live rituals, describing “A blend of droning synth, hammering drums, and creeping lap steel…their ambient magic provides the perfect soundscape to our darker, colder autumn evenings. Druss’ eerie vocals and complex layering will make the hairs of your neck stand tall,” while Hammer Smashed Sound complimented their sound thusly: “It is heavy (not in a metal sense, but in almost atangible, weighted sense), it is vibrant, and it is unrelenting.”

A European tour (including a handful of special festival appearances looms on the horizon), and the American West Coast will soon be granted a visit, as well. Stay tuned in to the darkness to come.