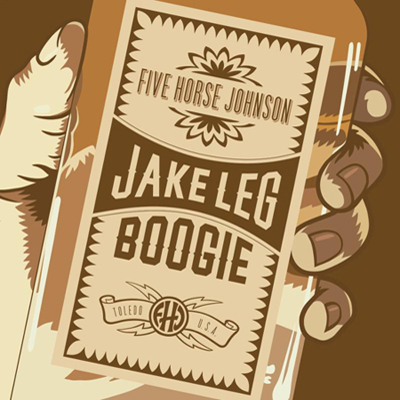 …hard, heavy, dirty blues rock ‘n’ roll for people who like the sound of an engine roaring or the feeling obtained by following a cold beer with a shot of good whiskey…

Five Horse Johnson will drop the gritty fruits of their Jake Leg Boogie upon the masses tomorrow via Small Stone.

In advance of its release, today Echoes And Dust is streaming the record in its entirety at THIS LOCATION.

Issues Eric Oblander [vocals/harp], “In many ways, making Jake Leg Boogie was one of the easiest albums to create, even though it took four years to make — sorry, Small Stone [laughs]. Our drummer Tim Gahagan is the engine that drives this band. Over the years, we have been very blessed to have a bevy of kick ass drummers sit in with us. I mean, it’s not every band who gets to make not one, but two albums with the great Jean Paul Gaster. But we all grew up with Tim, he was our very first drummer decades ago, and few people understand how we want to do this thing better than he does. That, along with Phil D taking a larger role in the writing process really opened up some fresh angles for us. I’m not sure I’ve ever heard Steve or Brad play better on any of our albums to date, and Brad’s lyric and vocal performances are the best yet. I striped back my harp playing and vocals a bit and tried to find the juicy, primal center, and getting back to collaborating with Brad on lyrics really helped me find fresh, new ways to sing some of the thoughts that were rolling around in my head. Also, thanks to artist Mark Dancey’s understanding of the Five Horse Johnson mission, the album art was, as usual, exactly what we wanted and needed. At the end of the day Five Horse Johnson is just a group of guys who like to laugh at each other’s jokes, throw back a few beers, travel the world playing music together, and record the coolest albums we can along the way, to document our experiences. Sometimes, if you don’t over think it and just get to it, good things happen. And that’s what’s at the heart of our new album Jake Leg Boogie. We hope ya’ll dig listening to it as much as we dug making it.”

Five Horse Johnson was forged in 1995. Some two decades and seven albums into their career – with eighth Jake Leg Boogie, set to drop late this June on Small Stone – Five Horse Johnson has dug out a niche of their own, a genuine love and respect for traditional blues and classic rock leading them to likewise become one of the most loved and respected bands in the heavy rock underground. Always a freight train live, they’ve toured the U.S. (with Clutch and Halfway To Gone) and Europe extensively (including the festival circuit), gathering fans, friends, and drinking partners all over the Western World.

Jake Leg Boogie sees Five Horse Johnson going back to its recording roots. Original drummer Tim Gahagan has rejoined, and the results are powerful. Brad Coffin’s guitar has never sounded heavier, his voice never stronger. Eric Oblander’s harp, meanwhile, is as sharp as a tailfin, and his gravelly vocal delivery a growling, howlin’ counterpoint to Coffin’s gruff style. Steve Smith’s bass is a strong backbone, while Phil Dürr’s guitar complements that of Coffin, adding extra edge for good measure. From the slow, bluesy stomp of the title-track, to the dirge vibe of “Daddy Was a Gun” – a story of some weird goings-on in a strange parish – Jake Leg Boogie is pure old-school Five Horse Johnson, recorded live, everyone in the same room, with as little overdubbing as possible. Accordingly, it feels lively and loud in the MC5-come-Hendrix vibe of “Hard Times,” the hard-rocking “Magic Man” (a tale of depravity set in the town of Springfield, Missouri), and the near-Texan boogie of “Smoke Show.”

Five Horse Johnson is not a band that makes apologies, and compromise is not an option. The truth is, this is hard, heavy, dirty blues rock ‘n’ roll for people who like the sound of an engine roaring or the feeling obtained by following a cold beer with a shot of good whiskey. Five Horse Johnson will gladly kick your ass, and then wait for you to say thank you and ask for another. Which you will.

“…there are enough moments of hard-rocking goodness on display here to draw in the unsuspecting denim-clad bystander. If you’ve ever enjoyed a dash of George Thorogood, Stevie Ray Vaughan, or ZZ Top, then there’s plenty here to get your teeth into.” — The Sentinel Daily

“‘Hard Times’ is a standout for its craftsmanship and for the classically motoring riff at its center. It is very, very American. Chevys, whiskey spelled with the extra ‘e,’ consciously ogling a lady standing right next to her dude – it’s all right there.” — The Obelisk on “Hard Times” 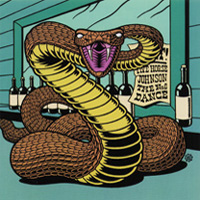 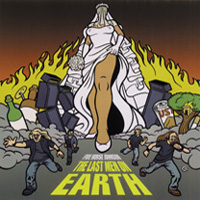 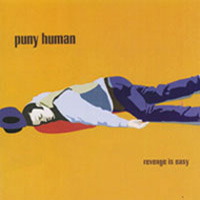