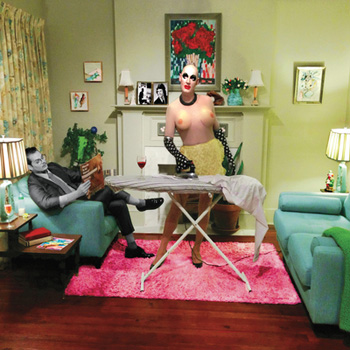 Tyson Meade, the enigmatic and legendary frontman for the pioneering ’80s band Defenestration and ’90s stalwarts the Chainsaw Kittens, is back with a new solo album on Detroit’s Jett Plastic Recordings.

“It is not an accident that many homosexuals should show a special preference for sailors, for the sailor on shore is symbolically the innocent god from the sea who is not bound by the law of the land and can therefore do anything without guilt.” – W.H. Auden

Some of us – the ones who question the world around them – are fringe dwellers, the outcasts of the empire. We question this world because we do not fit into this world. We are the lost astronauts looking for those golden secret moments with shored sailors, unscripted actors in non-existent films.

Me the misfit, a dandy born on a farm in rural Oklahoma, I navigated my way through tractors, baseball, hunting and fishing. Art – Warhol, Rauschenberg, Pollack – and music – the Beatles, Janis Joplin, Bowie, the New York Dolls, Melanie – saved me. Later literature – Jean Genet, John Rechy, Salinger – gave me the affirmation that those around me had seemingly found a place in their Judeo-Christian world in which I never belonged because I am an outcast, a misfit, the boy who hid his Barbies in a dresser drawer in his room. As a child, my best friend from school found them, outed me, damned me.

I was humiliated, cast out into the desert of loneliness. In this loneliness, I developed and embraced my outsider status. Eventually, in high school and college, I found some others on the fringe who played the game of normalcy. I at times even played that game but we knew it to be a game. Nothing mattered. Everything mattered. Rock and roll mattered. Music mattered. Patti Smith mattered. Ramones mattered.

My art is dedicated to those other fringe dwellers and friends of fringe dwellers, those who want something beyond reality TV, casino gambling, car payments, 401k, church on Sunday, family portraits on the mantle. We will build new kinds of families. The nuclear family is dead. Long live the dead nuclear family.

I willingly and lovingly now put my life on parade, every crack and blemish proudly metaphorically displayed. I have freed myself from the bondage of judgement of the nuclear family. And me and mine will rage like a fire through the world of bigotry, ignorance, lies, oppression, piety for the sake of piety, unholy holiness.

Thus, I am robbing the nuclear family of their power over me.