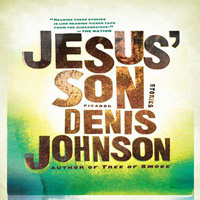 Start reading Jesus’ Son, by Denis Johnson, and you find yourself in the dreamy and perverse world of an addict. In a series of eleven interconnected stories, a narrator known only as “Fuckhead” pulls you through a slalom course of heroin-induced reveries, car crashes, murder, abortion, fraud, intentional and unintentional overdose, insanity, love ,and finally detox.

In the hands of most any other writer (I won’t mention any names), these not-so-common scenes of gutter Americana would appear as a parade of glamorized, gratuitous and ultimately meaningless efforts to shock the reader. It’s different with Johnson.

Though he partakes in almost every conceivable form of petty and severe crime, Johnson’s narrator is not the hardened and street-savvy dope fiend of, say, Seth Morgan’s epic Junk saga Homeboy. The narrator of Jesus’ Son is cowardly, romantic (which is not to say kind or generous) and surprisingly sentimental. He has the heart of an absolutist and the perceptions of a poet. As a result, scenes of violence and euphoria are not only shocking but surprising, and the narrator’s observations glow with a hallucinogenic luster that has become Johnson’s trademark, if a writer so original can be said to have a trademark. Listen to the following description, when, after an auto accident, the narrator is taken to the hospital, still wired on barbiturates, where he watches the wife of a deceased man come in to receive the news.

“The doctor took her into a room with a desk at the end of the hall, and from under the closed door a slab of brilliance radiated as if, by some stupendous process, diamonds were being incinerated in there. What a pair of lungs! She shrieked as I imagined an eagle would shriek. It felt wonderful to be alive to hear it! I’ve gone looking for that feeling everywhere.”

“Fuckhead’s” wanderings are an act of witness, the religious revelations of a vision seeker in a valueless world. While many of Johnson’s former books, such as Angels and Resuscitation of a Hanged Man, tell the stories of societal misfits, the stark first person narrative of Jesus’ Son heightens the immediacy, if not the artistry, of his latest book.

The scary thing is, these scenes are so compellingly rendered, it almost makes you want to be there and try it all yourself. As he relates his story, “Fuckhead” is totally unapologetic and unrepentant in the face of his crimes, and while he occasionally laments the hopelessness of his situation, the pain of his addict’s lows are mitigated for the reader by “Fuckhead’s” sense of humor – the humor of a self-acknowledged loser who revels in the pitiful and perverse.

Towards the end of the book, he comments to the reader about his spying on a woman in the shower.

“How could I do it? How could a person go that low? And I understanding your question, to which I reply, are you kidding? I’d been much lower than that. And I expected to see myself do much worse.” In an interview (not with me, unfortunately), Mr. Johnson said “you might as well call this book an autobiography.” Although I have no license to take this comment literally, in the pen-ultimate story of Jesus’ Son it appears that the narrator is, in fact, a writer. Taken as the story of a writer’s life, Jesus’ Son has to be this generation’s freshest and most revealing example of an old, often clinched, subject. What we don’t have here is the age-old scene of the poor, undernourished writer forsaking worldly pleasures to sit in his ramshackle apartment and ponder (wide-eyed) the purer mysteries of the written word. Thank goodness. What we do have is a study of an artist’s consciousness on its trip through the badlands, a man with a transforming vision that finds beauty in violence, meaning in a void, life in a living room of death. Johnson turns our conventional morality on its head for the sake of art – not unlike what Oscar Wilde did to Victorian manners at the end of the nineteenth century. Like Wilde, Johnson is an original. Perhaps that’s where the similarities end.