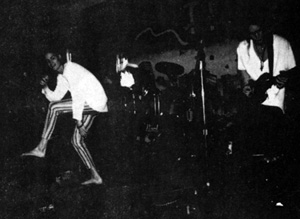 at T.T. the Bear’s
by Mike Black
photo by Dya Khalfa

What a day! Clear and sunny all day. Perfect setting (despite work and a minimal amount of reefer) to spend looking forward to seeing such an exciting band. Evelyn Swoons is a hard-pounding, rock-sounding, no fucking-around group of five playing the ears off of Boston area club goers. Instantly commanding my attention as they tore into “Blank T-Shirts,” they lit up the stage with a sprinkling of colored box-lites, bright spotlights and a crazy swirling light machine called “The Vagenious.” What a centerpiece lead man. Skye snakes around the stage in a display of flexibility and professional hair whipping. This guy sings his ass off. The music is fast, exciting, with ever-changing grooves. Covering lead guitar and backup vocals, Jeff puts on a dazzling rubber monkey-augmented performance while also piling on some outstanding percussion help. It comes together with Dan, tearing up his drum kit. Plenty of hardcore cymbal work here. Eric and Sean work their way through it full time. The visual climax hits as the strobe-globe begins to flash and Jeff breaks into the crowd with me-pleaser “Land Scape Goat.” What a jam!

Being familiar with their stage performance, I felt that Skye didn’t have nearly enough room to strut his stuff. He told me he felt the same way. They seemed to think the show went a bit sloppy due to lack of “sit back, relax and get buzzed” time prior to set time, but I thoroughly enjoyed it. There was a bit of hesitation between songs, but near perfect. They topped the night off with “Dreaming Again.” Everything you could ask for in a last song: long and hard, with its own built in encore.

For the record: Skye’s mom was at the show, Riya was working the door and there was more than one Mike on the guest list. I didn’t get to meet the pretty young lady photographer but she was there snapping away. Evelyn Swoons has tapes, records and maybe even CDs available at the show in case you dig ’em like I do. The audio is dirt cheap too! At the last show I saw at the Rat, I got an incredible deal: For my measly $1.88 in change (12 cents off retail) I received a copy of their latest “Black on Hawaii,” another tape “Where’s my Golden Arm?” and a smaller laminated version of their show flyer. How can you go wrong? I suggest you check out Evelyn Swoons. They have a small loyal following and a larger not so loyal group that hasn’t been seen, but they do exist. 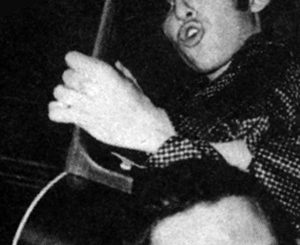 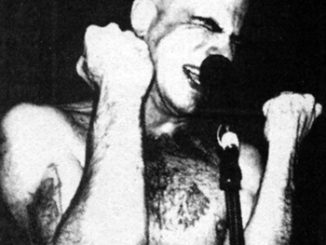 Gas Huffer – with The Cramps at Avalon – Review