with GWAR at The Strand
by Dave Wedge

Decked out in Road-Warrior-esque garb, GWAR drenched the Strand and its patrons in fake blood during a stellar show that showcased the best apocalyptic-punk from these Richmond, Virginia art students.

The mythological GWAR have been banished to Antarctica by the Master of All Reality after having wrought havoc on the Universe for millions of years. Since their banishment, they have been touring the Earth, recruiting slaves to join Slave Pit Inc. to help them in their fight to rule the Universe.

Wednesday night at the Strand, GWAR, touring in support of its fifth album, This Toilet Earth (Metal Blade), whipped the crowd into near-riot with their comic book stage show, complete with a 15-foot human-consuming monstrosity called the “Flesh Column” that actually “ate” a number of brave audience members who jumped on stage. Who knows where they may be today?

Clichés aside, the show must be seen to be believed. From life-size caricatures of Frank Sinatra and Eddie Munster, to a huge wrestling ring – Antarctica’s Most Famous Rock Band is non-stop thrash, mayhem and comedy all rolled into one disgustingly beautiful mess. Musically, the band is at the top of the death-core field, but they also manage to mix in jazz, funk and even do a show tune-type number called “Have U Seen Me?”

The Strand, one of the few area clubs that allows stage-diving, was packed tightly full of potential slaves, all of whom offered their bodies in sacrifice to catch a glimpse of their heroes of the Universe, GWAR.

Opening band, Buzzov-en, played a short set of fiery and inspired thrash-punk, reminiscent of old Ministry. They stuck mostly to material from Sore (Roadrunner), but did play a few selections from To a Frown. The highlights of the set were the title track and an old-fashioned punk number called “Done.” 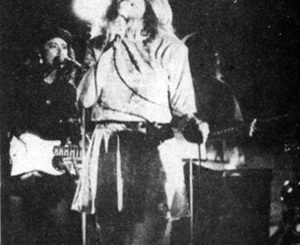 The Swansons – with Smashing Orange, Cher U.K. at The Rat – Review