Slughog started the show with songs that were as tight as Newt Gingritch’s sphincter. Two basses, good fashion sense from the guitarist (a fortuitous omen!), and a freight train of sound bowled us over. The only criticism I’d make is to have the guitar almost entirely high end, like D. Boon’s, to cut through and add to the bass’ assault. Other than that, I’d highly recommend them to anyone.

Klover rounded off the night with an introduction that sent up the fashion show, and launched into a set that blew me away. Maybe it was the five whiskey sours I drank, but I felt like I was “back in the day” (to quote our fearless leader/publisher) at an ’80s British punk show. Sure, the crowd was a lot mellower, but the music rocked like the Clash’s first album, or the Jam on crack, or something. Sure, half of Klover is Gang Green, but it sounded so fresh and raw, with Mike Stone’s voice tearing away, his guitar slung near his knees, shouting out anthemic tunes with energy that couldn’t be ignored or discarded. Feel Lucky Punk (Mercury) comes out in late August. Pick it up.

Buzzoven – with GWAR at The Strand – Review

Firewater – The Man On The Burning Tightrope – Review 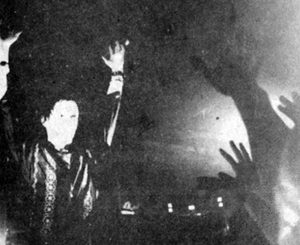