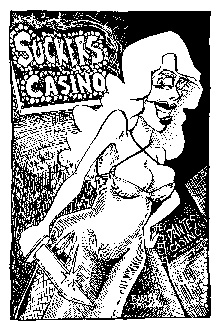 Dispatches From the City of Death

Okay, all you martini-sucking hepcats, it’s long overdue that someone addresses the plague-like invasion of Las Vegas by armies of incredibly well-dressed, $2 gamblers who cannot hold their liquor.

Obviously, I’m not talking about the Persian-Swinger-Car-Phone-Wielding-Tacky-Silk-Shirt-Wearing-Bathed-in-Drakkar-Euro-Trash-Types that seem to have taken over the Mirage, Desert Inn, and especially, the Monte Carlo! Nor am I referring to the Ponytailed-Pretty-Boy-White-Trash-Turned-Porno-Actors-From-L.A-With-Their-Oddly-Bent-Dicks-and-Their-Collections-of-Ayn-Rand-That-They-Keep-in-the-Trunk-of-Their-Camaros-as-They-Cruise-Down-the-Strip-Blaring-Overly-Bass-Crack-Cocaine-Music-Types. These scummy subsets of humanity have always had an affinity for Sin City. And, as distasteful as they are, at least their love for the city is real.

No, this new intruder is best exemplified by a scene from the recent film, Swingers . In the Vegas segment of the film, we get to watch as two hipster schmucks go to Comptown in search of the Holy Vig. Or, at least, the next best thing – the removal from one’s memory of a wrecking ball of a girlfriend. After a whole lot of big talk, it turns out (of course) that our hepcats couldn’t gamble their way out of a paper bag. This scene best illustrates one of the most disturbing aspects of the current Cocktail Reich revival, that being its ironic and false promotion of a way of life that its own self-styled swanksters haven’t truly got the guts to indulge in.

After all, what rings more false than all those Self-Proclaimed-Martini-Mavens, who secretly don’t even drink? Or this myriad of Young-Hard-Drinking-Bukowski-Tough-Guy-Alcoholic-Wannabe’s who profess to vegetarianism for health reasons? Or all those pathetic losers who insist that their friends call them “Mr. Vegas” at their piddly penny-ante poker games, but have no idea what to do with a soft-17 against a dealer’s 8.

Let’s face it, loungesters! It’s time to look truth straight in the eye, and not shy away from the ugly reality of it all. While all the new, young Dean Martin clones of the world would have you believe that the Sands was still standing, and that Sammy was just taking a long nap; the reality is that slick, old Swanktown is long dead and buried.

Sadly, the Neo-Swinger vision of Neonville is as false and incorrect as the new Mega-Buck Corporate Hitler vision of Vegas. The cowardly new proponents of Comdex-Town would have you believe that this was the world’s largest Chuck E. Cheese Pizza joint; all full of virginal angst and cartoon pathos. But this is not Disneyland (unless you’ve got the brains, guts, and insight to see that particular lie as the evil empire cesspool that it is!)

Face it, folks. Vegas is the big, beautiful lie. We know that its truth lies not so much within the refined images of the yupsters in Bally’s commercials, as it does in the toothless, leatherfaced losers who pass out “Young Hot Pussy” pamphlets all along the Strip. Youth can con itself all it wants with its imagery of victory. But any true gambler will tell you: Vegas is the city of loss. It is the city of the forlorn; the last stop of the damned. It is the city of gleaming white death, and it is utterly beautiful in its bitter, barren harshness.

Vegas is Satan’s playground. It’s the agony of the small change grandma; running out of nickels, and it’s only Saturday morning.

It’s Howard Hughes, naked and alone in his Desert Inn lair. The windows blacked out; his fingernails curling back on themselves; he’s screaming to faceless Mormons via the squawk box: “Dump Standard! Dump IBM! And bring me some more goddamn disinfectant!”

Vegas is the broken little brother who drags your entire family down with him. It’s 3 a.m. craps table sadness; it’s still sobriety seeping in over the gentle fading of slot machine bells.

It’s Louis Prima in the blaring white hell of the Sands’ steam room. Overwhelmed with self-contempt, he stares down at the wide, white expanse of his own monumental gut. Degenerate drinker, degenerate eater, degenerate gambler, degenerate adulterer; even in his shame he has a hard-on.

Vegas is the beautiful city of despair. It’s the outcall massage girl – not the same one advertised in the pamphlet. Attractive and haggard at the same time; she’s all business. Work, work, work. Cold and charmless, she reminds you of no one but your wife.

Vegas is Elvis dying onstage. Fat, dejected, and sweating butter, all he can think about is his dead mother and the next handful of pills. He’s glad that it’s only a matter of time; that all the Cadillacs, hotcakes, and fried peanut butter sandwiches in the world can’t save him now.

It’s Jim Crow at the Flamingo. It’s 1949 and Lena Horne, selling out two shows a night, but still not allowed to eat in the coffee shop. Even going to the bathroom is clandestine, there are no “Negroes Only” shitrooms in Bugsy’s dream palace. She sings; collects her take; then heads back to the East Vegas slum-tel where she lives the best life that you can expect from all those adoring Whiteys.

Vegas is the most beautiful inflatable girl in the world. It’s the Western Union office at the Luxor, where they only allow money to be wired in.

Vegas; it’s where hope springs eternal as liquor. It’s the cashier at the Gold Spike, laughing as he cashes another welfare check for chips. It’s knowing better than to even wish these lowlifes good luck. It’s looking doom in the face, and taking advantage of it.

It’s Sammy Davis, Jr., tired of being the house nigger. It’s being weary and tired; sick of wondering about your friends’ intentions. It’s never being sure if you’re loved for who you are, what you can provide, or for your downright stylish conk.

Vegas is the beautiful siren who lures swingers to their doom. Only Fundamentalists, Mormons, and very prissy Homosexual magicians can survive its sins.

Vegas is Moe Dalitz dropping dead while shooting craps at a Desert Inn table. It’s Bugsy getting his pretty mug blown out the back of his coifed head. It’s Tony “the Ant” stripped naked, beaten with baseball bats, and buried in an Indiana cornfield. It’s old Meyer Lansky, Caesar’s cashbox, passing peacefully in his slumber.

Vegas is a smiling whore with a knife. It’s the ballerina-turned-showgirl-turned-dancer-turned-stripper-turned-porno star-turned-wholesale-cocksucking slag. “It’s the law of diminishing returns,” she tells you, offering a $50 blow.

It’s the last ditch, but it’s filled with gold. It’s some guy yelling at himself in the casino bathroom mirror. It’s a former millionaire sucking down Vicodins and Vodka-tonics in his penthouse suite-tomb.

Vegas is where even faith has a neon hue. It’s the newly reformed alcoholic-drug addict-sex addict-gambling addict. It’s the guy who has nothing left but a cheap Sears suit, and three chain-smoking sessions a day. He’s seen it all, but doesn’t have the guts – or sense – to gouge his eyes out.

Vegas is the city of absolute truth. It’s John O’Brien putting the gun in his mouth only days after having just sold Leaving Las Vegas.

Vegas is the city too cruel to lie.

Vegas is the last dissolute gambler… at the last empty blackjack table. Drunk, and losing the last of his embezzled funds, he wears the hollow smile of the damned. At peace with his own self-destruction, he orders a last Bourbon and Coke and pitches the cocktail waitress a green chip. 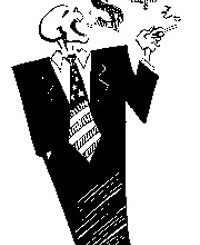 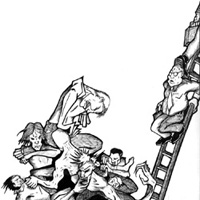