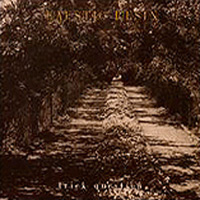 OK, I heard a rec. by these guys a couple years ago and it was good. Like this one. Never heard their first, Body Love Body Hate, but from what I’ve read, this is more structured and “songly.” Well, I like songs in my rock stew, that’s what gives impact to the proceeding. If I want jams and long form/flow ambiance I know where the wife’s got the Skullflower discs hid and there’s a buncha Coltrane and so forth 18 inches from this keyboard. So be it. I was writing a bit on the band Natas for this self same mag and up popped David Gilmour’s name. Well, actually his guitar tone and the emotional feel of his pained blues rock. Most of you’ll know him from Pink Floyd, but Caustic Resin seem to nail down a bummed and bitter perspective like Gilmour’s solo rec., David Gilmour, from ’78. Interestingly, Caustic Resin have mentioned Pink Floyd themselves, and while I haven’t played a non-’60s Floyd rec. in a decade, I sure wouldn’t mind having Meddle, Wish You Were Here, and Animals around. Those are good ones, and I’d guess where I would place CR’s Floyd similitudes. No matter. 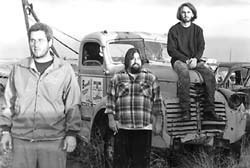 This is good to very-good guitar stroke concerned with things falling apart, (minds, relationships, feelings). If one wants a disc of total blues feeling w/o adhering to any blues conventions (well… outside of the pained acid rock guitar mined from “blues”) and was wandering thru my stacks, here is one to steal along with Sundials’ Acid Mantra, Dinosaur Jr.’s Your Living All Over Me, various tracks from those Mike Gunn discs I try to get everyone to like, a buncha Bevis Frond tracks (don’t let his association with Mary Lou Lord ruin him for you), and various stuff from brother JT. Like that stuff, Caustic Resin aren’t afraid of folkiness and strumming their way thru tunes that’d make a Chris Whitley fan (unh, me) rub his butt and nod. Hey, when they turn up the tempo to rock, it does. Witness “Road Block.” When they hit mid-tempo, like “Eating Bugs,” with that cool kinda looped drum thing going on with the strummed acoustic sitting under the arced electric rope-a-note-let-it-hang approach, you gotta think some non-pussy “alternative” station’d play it. Hey, that other Caustic R. disc I heard was The Medicine is Gone, and from what I wrote, if you like that one, you’ll like this one. Oh, my wife says, “It’s sorta a generational corollary to ‘Inside Outside’/’New! Improved!’ era Blue Cheer.” There you go: all the brains, all the pussy, half the money – what does she keep me around for?
(10153 1/2 Riverside Dr #115 Tuluca Lake, CA 91602) 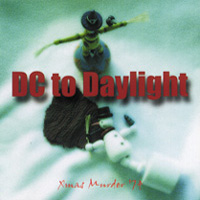 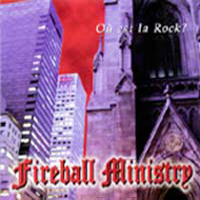 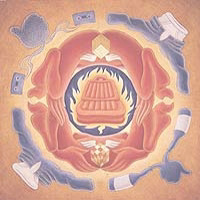