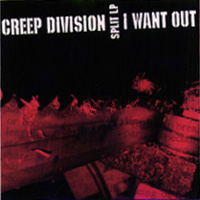 Two very different bands share the same bass player, one Chuck Platt. At different points in the record and depending on the listener’s mood, both bands are better.

Creep Division doles it out hard and heavy. Where they excel is mixing up lethargic, Neolithic metal with double-time hardcore ’82 punk. Mr. Platt carries the lion’s share of the melody in this outfit, while Craig Ahead howls manly platitudes that clear out the amplifier pots. Their gang-vocals on “So Fuck You” sound like “super cow,” and yes, I like my lyrics better. The mosh pit at these shows has got to be a dentist’s nightmare. Short and vicious rants for old-schoolers.

On the flipside, I Want Out is more melodic while still favoring the Y chromosome. More singing than screaming, Ed Gregor manages to use all the lung tissue God gave him. “Pull Up a Chair” has guitar diddling that actually brings a Johnny Marr flavor to the lyrics “It’s your turn to supplicate in fear… I’m going to watch you die tonight.” Don’t take this wrong, but on “Cut It,” these guys somehow channel Sponge and Bush in their much ballsier sound. And who doesn’t like a little spongy bush? It’s better than I described. It’s catchy and flavorful, with plenty of smash-and-grab, OK?
(www.loreleirecords.com) 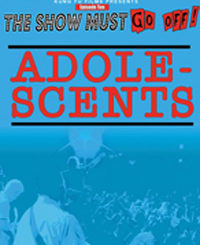 The Adolescents – Live at the House of Blues – Review 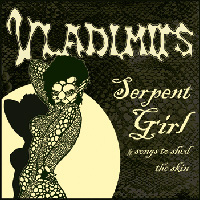 The Vladimirs – Serpent Girl & Songs To Shed The Skin – Review