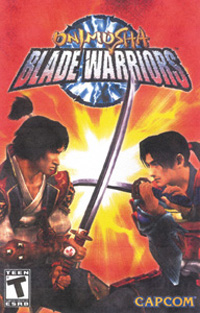 Capcom is one of the only companies outside of Nintendo that has a stable of characters with enough fans and recognizable appeal to allow them to throw the faces around in all sorts of crazy gaming experiments. Mega Man in a soccer game? Check. Charlie and Cammy of Street Fighter fame in a Smash TV-style shoot-’em-up? Check. Jill from Resident Evil battling Marvel superheroes with heavy artillery and a steady arsenal of zombie slaves? Oh yes…

Both the company’s sense of daring and sense of humor are what have earned them a rabid fan base since the NES days. So it’s not too much of a stretch that they’d set sail an over-the-top four-player fighting game staffed with characters from the Onimusha adventure series. After all, the four-player free-roaming fighting game was done better by Capcom with Power Stone on the Sega Dreamcast than the much more widely praised and recognized Super Smash Bros. by Nintendo in 1999. Plus, the Onimusha series has enjoyed considerable success, and buzz was high for the recently released third installment, which inexplicably starred Jean “I’m French” Reno as a main character. 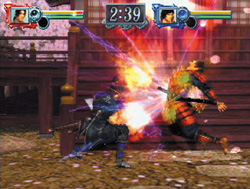 But even with everything seemingly in place, Onimusha: Blade Warriors runs aground faster than a 3D Street Fighter. First, the characters aren’t interesting. Without a story to push them along, they’re drab and pedestrian, whereas fighting games can live and die off the strength of their cast even in the face of poor or uninspired gameplay. Unfortunately, that’s just what is on display here. With only kick, punch, and jump buttons at your disposal, more often than not, it feels like the tedium of Final Fight rather than the richness of Street Fighter.

Power Stone also had only limited commands, and it wouldn’t stand up today as a new release. But it had a kind of freewheeling, colorful approach that made it endearing, whereas Blade Warriors seems overly serious, even though players can bop each other with the cartoonish contents of randomly-appearing battlefield treasure chests. Some of the fighting environments are attractive, but many aren’t, nor are the various menu screens.

Blade Warriors comes closest to being alive through the use of the PS2 multi-tap, the rarely-seen adapter that lets four gamers play simultaneously. The one-player missions are completely unsatisfying, and two players might only reap some limited fun out of running around the unconventional three-tiered playing field, a break from the strict one plane of most 2D fighting games. But after running around a little bit, it’s best to keep running… away from this game.
(www.capcom.com) 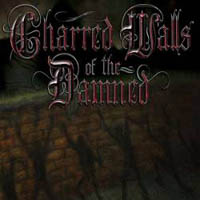 Charred Walls of the Damned – Review

For The Sake of Heaviness: The History of Metal Blade Records – Review