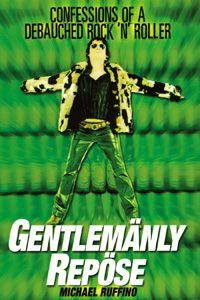 Wearing only your robe and slippers, you have locked yourself out of an empty tour bus parked (illegally) on the street in Paris. What do you do? Well, if you’re Mike Ruffino, you go get a drink.

Ruffino was the bassist for the Unband, an AC/DC-influenced trainwreck of an act that toured Europe and the U.S. in 1999-2000 with the likes of Dio, Motörhead, Def Leopard, and Dokken. His excellent tour-bio is notable more for what it is not (a boring lament for glory days) than for what it is (a gin-soaked frenetic disaster). No one in this book is chastened, Behind the Music-style, by their struggle with drink. The only drinking problem these guys have is running out.

The book starts with Ruffino’s first metal band in high school that gets a gig playing in a friend’s living room during a football game. Well, not during the game exactly, only during the commercials. Oh, and only during the lame commercials. After this unconventional first set, Ruffino joins the Unband, gets spectacularly banned from most clubs in Boston, and moves to a house in Northampton, MA that would give the “Motley House” in The Dirt a run for its beer money. Somehow, through a series of drunken, coked-up escapades, they put together a great CD, Retarder (TVT), and launch a drunken, coked-up tour of the U.S.

Most rock biographies of late are one of three things: An exposé of the evil recording industry, band breakup books full of gripes, grudges, and gropes, or the fine tale of a rocker who cleans himself up and is now knitting sweaters for sea lions with cancer or some shit. This book has none of that. It’s about living the rock with no excuses, as if it were a vocation. In the old days, the idle rich would pursue their vocation of doing nothing with pride and gusto. Ruffino, in the same manner, takes the modern disheveled drink-and-rock life and attempts to elevate it to a comic art form. He muses about the working style of his current band, Old Money: “Hey, you go to your job every day and we go to ours, which is the same as a regular job, but with more drinks and so forth.”

There are excellent bits about where best to do DMT on a schedule and how to explain to police why you are playing without clothes (“they fell off”). Ruffino writes what may become a classic: Possibly the funniest music review ever written entirely in a South Boston accent. He spends the book twisted like a corkscrew on god-knows-what dealing with bizarre locals at Hooters, beer-drinking chimps, and coked-crazed dwarfs. Throughout it all, proper rock attitude is all-important. After all, when the Unband is racing across Canada taking unknown pills in an unregistered van full of unlicensed drivers on the way to an uncertain gig, one most certainly needs to draw from the reserves of gentlemanly repose.
(www.kensingtonbooks.com)