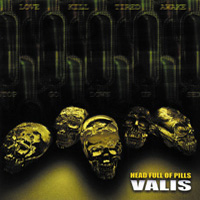 A nice example of knob-twiddling weirdness seamlessly integrated with duh-style riff rock, Head Full of Pills trundles some of the same hard rock/psych crossover territory as Van Conner’s former band, Screaming Trees, only Valis is both more hard rock and more psychedelic. I’m assuming the blame for the stranger stuff goes to Wes Weresch, whose credit in the liners simply reads “trip.” I’d guess that includes the echoplex, sonic oscillators, triangles, keyboard whooses, and other such shit that appears in one or both speakers just long enough for you to wonder “what is that?” before it’s gone, replaced by either another bit of weirdness, or by one of the massive riffs that’re never in short supply.

Seriously, I don’t want to spend too much time talking about the psych trickery, because that’s only a garnish on the overall meaty extravaganza of a rock record that this is. The A1 on the steak, if you will. Have no doubt that Valis is anything but a rock band, as the riffs of “Voyager” or the massive “Motorbike” will assure all who cross these paths. Even when things slow down and get a little spacy, as on the title track or “Across the Sky,” loud guitars and pummeled drum kits are still the name of the game.

There’s a decided lack of Screaming Trees fanfare surrounding this band, which is understandable, but it’s still important to note that your first love doesn’t change over the course of your life, so the same love of rock that inspired the Trees inspired Valis. If you liked Screaming Trees or other Sub Pop bands that were interested in psychedelic rock (Love Battery, for one), you’ll probably like Head Full of Pills.
(www.smallstone.com) 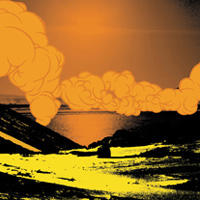