Ancient VVisdom are sworn to the dark

Ancient VVisdom (pronounced: Ancient Wisdom) released its debut album A Godlike Inferno on June 7 via Shinebox Recordings. The blackened neo-folk / demonic rock squad who recently issued a one sided split 12″ LP with Charles Manson (see here) recorded the album at Austin’s The Bubble Studio (Built to Spill, Explosions in the Sky, Mammoth Grinder) and promises “a dark, enlightening foresight into the future of humankind.”

As word about the band’s infectious sound spread throughout Austin, Ancient VVisdom began performing live and soon became a favorite opener for like-minded touring acts including SWANS, Scott Kelly (of Neurosis) and Wino. The band created a huge buzz at the 2011 SXSW music festival when they opened for similarly subvert legends EyeHateGod and Pentagram to racous response.

“We are the devil’s blues, folk, and rock n roll,” commented front man Nathan Opposition when asked about the band’s sound.  “Chaos and control.  Phantasy and reality.  Life and death…the evolution of Satan’s influence on modern pop culture.  We are the beginning of nothing. We are the end of everything.”

The track listing for A Godlike Inferno is as follows: 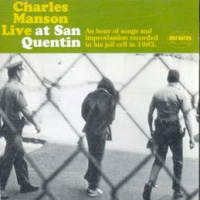