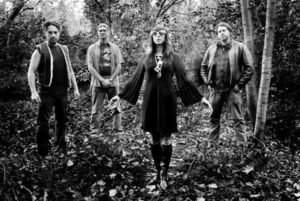 In celebration of the imminent release of Satyress’s Dark Fortunes, Decibel Magazine has set up an exclusive full album stream of the Portland doom coven’s debut LP. Listen to the album the magazine described as “Dark, heavy, a little progressive, and catchy as the place their Lord lives…a standout in what has become – let’s face it – a pretty crowded genre” in its smoky, eldritch entirety at this location.

Terrorizer Magazine has heaped praise upon the young band, writing of the song “Esta Noche” that it “is a fine example of the band’s sound, riding a sultry, urgent groove into an utterly righteous explosion of searing leads. Imagine if you suddenly found out Coven had recorded an album with Victor Griffin on guitar and then never released it…”

Meat Mead Metal also sang their praises in a recent review, stating “they have an incredible appeal and true doom magic that not every band of their ilk can boast, and as noted, they have one hell of a great singer who seems capable of anything. Dark Fortunes is a really strong first effort, one you should make a point to hear even if you only have a mild interest in doom metal. This band has the chance to surpass that boundary and enrapture a much larger audience. All they need if your ears and an eager heart, and they’ll have you in their clutches for good,” while stoner metal mecca The Obelisk remarked, “What the band do best across the length of the half-hour full-length is balance doom and heavy rock smoothly playing each off the other, so that “Soma” has a bit of presence to go with its catchy riff and swirling climax.”

Psych-infused, melodic doom metallers Satyress formed in the brutal Portland winter of 2012. Within a realm known for its lack of sun and tall timber, inhabitants form chants in response to misted dark clouds. Together, the spawn of LSD&D and a singer known as the Dead Bird of Night Dreams set in motion a trial which would test the vocal range and maternal power of the four-headed Chimara to the utmost. Through witchery ritual and carnal riffs Satyress conjures up the force of rock’s potent spirit.

Satyress released this digital diadem on Bandcamp on April 8, 2014 with a vinyl LP version of Dark Fortunes set for international release in spring 2014.

The album was recorded and mixed at Opal Studios in Portland, Oregon with Kevin Hahn in the summer of 2013, with mastering manifested at Audioseige with Brad Boatright. The eldritch cover artwork and layout come courtesy of artist Calvin Cushman and Jason Rober.