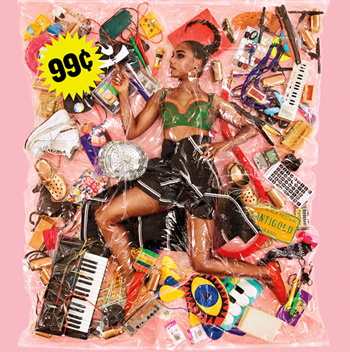 Santigold has announced that she will release her third album, 99¢, on January 22nd via Atlantic Records. The first single, “Can’t Get Enough of Myself (feat. B.C.)” is available now at all digital retailers and as an instant grat with select album preorders. The song had it’s premier on Zane Lowe’s Beats 1 radio show yesterday.

On 99¢, Santigold explores the commercial nature of our world and the ways in which we package ourselves and our lives for consumption. “We have no illusion that we don’t live in this world where everything is packaged. People’s lives, persona, everything, is deliberate, and mediated. It can be dark and haunting and tricky, and freak us out, but it can be also be silly and fun and we can learn to play with it,” she says. She also explores our fascination with perfection and our inherent inability to attain it. The use of playful satire, social critique, and self-examination to explore these themes is reflected in the album’s cover art, a collaboration with photographer Haruhiko Kawaguchi, finds Santigold shrink-wrapped amongst her cluttered possessions ready for the store shelves.

Following her last album, the dark and cerebral Master of My Make Believe, Santigold wanted to explore new corners of her sound and different ways to convey her vision and political commentary.  She worked with new collaborators Patrik Berger, Rostam Batmanglij, Hit Boy, Justin Raisen, ILOVEMAKONNEN, and Sam Dew and longtime cohorts John Hill, Dave Sitek, and Doc McKinney. The result is the bright and big sound of 99¢ that takes the genre-defying fearlessness Santigold has become known for to new places.

Santigold’s sophmore album, Master of My Make Believe became her first #1 album, topping the Billboard Dance/ Electronic albums chart. She’s won an ASCAP Pop Music award (Vanguard Award), and has been nominated for a Q Award, MTV Europe Music Award, and BRIT Award. Her recent brand collaborations include a limited edition make up collection for Smashbox and an accessories collection for Stance. She recently had comedic roles on The Office and Adult Swim’s NTSF:SD:SUV.