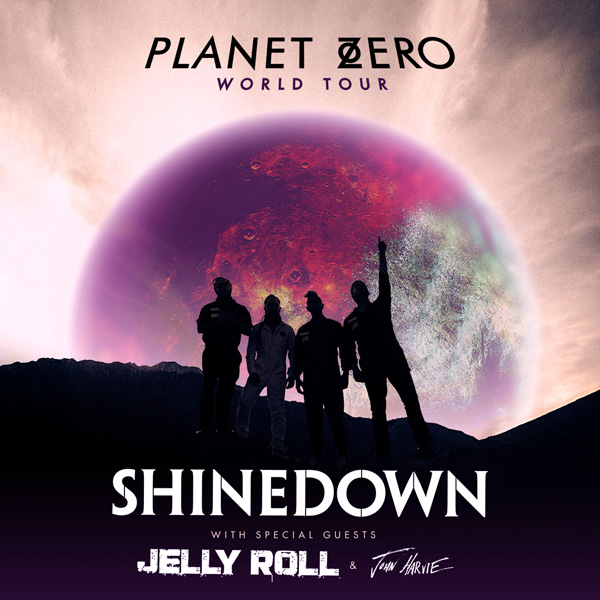 Ahead of the April 22 release of their new album Planet Zero, multi-platinum band Shinedown have announced the Planet Zero World Tour (produced by Live Nation), with special guests Jelly Roll and John Harvie, and have also released “The Saints of Violence and Innuendo,” a brand-new song from the forthcoming album.
The Planet Zero World Tour begins in Bonner Springs, KS on September 3, kicking off a 20-date US run of fall shows that will see the record-breaking, chart-topping band bring their new music, #1 hits, fan favorites, and biggest stage show yet to cities from coast to coast in support of Planet Zero. Tickets are available at www.livenation.com. This leg of the Planet Zero World Tour also includes festival performances at Louder Than Life on September 23 in Louisville, KY and Aftershock on October 9 in Sacramento, CA. Full routing below, including The Revolution’s Live Tour kicking off April 1 with special guests The Pretty Reckless and Diamante, followed by UK/Europe festival sets and select shows with Iron Maiden in June and Canadian dates with special guests Pop Evil and Ayron Jones in July and August. For tickets and all show details, please visit www.shinedown.com.
While lead single “Planet Zero” – Shinedown’s record-breaking 18th #1 – remains in the top spot at Active Rock Radio for the fourth consecutive week, the band has released album track “The Saints of Violence and Innuendo.” The frenetic yet massively catchy track takes on the platforms and institutions that don’t value honesty and instead use half-truths, false narratives and innuendo to push agendas that are often not reflective of the people’s best interest. PRESS HERE to listen to “The Saints of Violence and Innuendo” and HERE to check out the lyric video. Pre-order Planet Zero HERE. Each pre-order includes an instant download of “Planet Zero” and “The Saints of Violence and Innuendo.”
“Planet Zero” (PRESS HERE to watch the new music video) and “The Saints of Violence and Innuendo” introduce an album that sees Shinedown taking on the forces that keep us divided at a time when we need to be coming together. These songs warn of the dangerous dehumanizing consequences of cancel culture run rampant – if we shut each other down, we risk losing empathy, respect for one another, and our ability to communicate and unify in a way that leads to actual progress and understanding. Planet Zero is an incisive look at some of society’s most critical issues, including the increasingly toxic division among those of differing ideologies, the need for honesty in our public discourse, and the corrosive effects of social media and cancel culture on mental health and humanity. Part social commentary and part in-depth exploration of the human psyche, there is also hope, triumph, and reminders that we all need one another. After all, it is the band’s impassioned striving for unity that has long been at the heart of their creative output.
The high-concept, ultra-vivid, viscerally charged album was produced by Shinedown’s Eric Bass (who also produced the band’s 2018 acclaimed album Attention Attention) and recorded at Bass’ newly built Big Animal Studio in South Carolina. 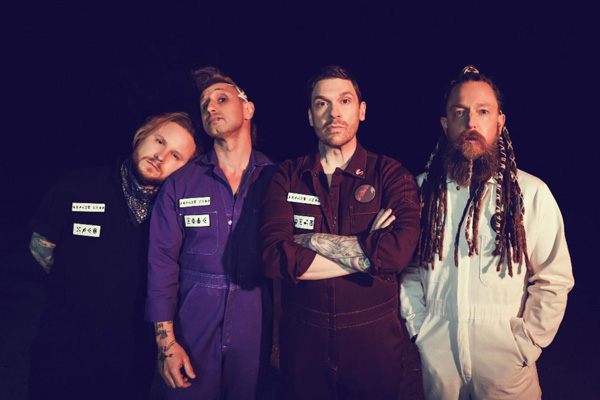 Shinedown also recently made their Attention Attention feature film available worldwide. A stunning visual counterpart to their 2018 acclaimed album of the same name, the film brings to life the album’s narrative about a mental health journey and the resolve of the human spirit, weaving together 14 songs into a provocative and thought-provoking cinematic story that illuminates yet another dimension of Shinedown’s limitless creativity. PRESS HERE to watch the trailer. The film, directed by Bill Yukich (Beyoncé, Metallica, Wiz Khalifa) is now available to rent and purchase worldwide on Vimeo and is available on iTunes in select territories. It is also available on digital and cable VOD in the U.S. and Canada, and on Blu-ray and DVD – PRESS HERE to purchase and watch. 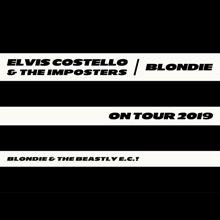