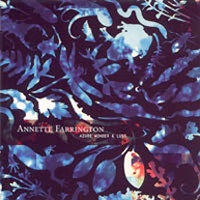 Azure Wonder & Lust is complex, samples-rich, echoey, wah-full and skittered up with instrumental comments that blow and crawl and scuttle in all directions.