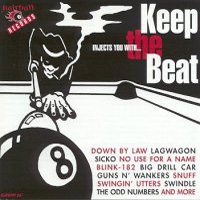 Rare and unreleased tracks by bands of interest that aren’t rare or unreleased because they’re inferior. Their style just isn’t the primary focus of the band.