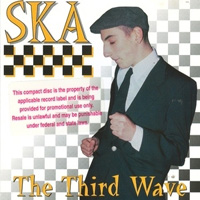 Some established ska acts like Mephiskapheles and Ruder Than You, as well as some newer bands such as Less Than Jake (my favorite), and Mock Turtle Soup.