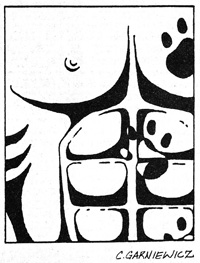 Cynthia spanked Chelsea’s bare bottom just enough to get the firm flesh rippling. She slapped until the smooth, creamy white skin was blushed. Chelsea writhed in pleasure until Cynthia asked the imminent question, “How about tonight, Chels?” Hope filled her voice.

“You know better than to ask, Cyn.” Chelsea felt bad that she could never let Cynthia do what she really wanted to do, but Chelsea knew she wasn’t a lesbian. She just liked to be spanked by a woman. The soft pain made everything seem real, made her feel alive. Besides, Cynthia had two other touch partners: A girl named Amanda and some guy whose dorm room they used for the spankings. Cynthia had a place to go for her fulfillment.

To completely fulfill her, Chelsea needed a man, or at least a reasonable facsimile thereof. Gus served the purpose.

He was into steroids and lifting, so he was big enough to handle her large, but shapely body. He worked at the local bar and got into at least four fights a week. He had a large penis. Were it not for his bizarre requests in the bedroom, he would have been the perfect touch partner.

By far the most bizarre item on Gus’ extensive list of fetishes was the catsuit. Not long after they’d started seeing each other, he’d brought it out and told her to wear it every time they had sex. It was made of translucent, black spandex and covered her from neck to toes, with holes for her nipples and genitals. At first Chelsea tried to get out of wearing it, it felt weird, but soon she realized the suit was the difference between a night of boring sex and a night of ecstasy with Gus.

It came to the day when she found herself aroused at just the thought of the catsuit. One night she took it with her when she left Gus’ house, drove all the way home in the morning darkness with it on, blaring Megadeth and touching herself.

Gus arrived at Chelsea’s minutes after her return from his house. She still had the catsuit on. The lights were off and she was standing in her kitchen, just staring out into the moonlit backyard, caressing herself, when Gus burst in the front door, snarling, “Why did you take it?! Give it back, NOW!” His rage filled the room, and she really believed he was capable of causing her great harm. 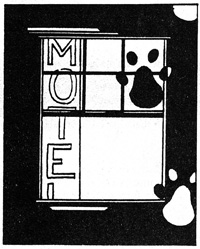 Frightened, Chelsea stripped naked and handed it over to him. Gus snatched it from her trembling hand, glared at her once in the darkness, and left.

Gus, relieved at having his catsuit, raced to the Combat Zone directly from Chelsea’s. He was running late. His show started in less than an hour, and it was a long drive. King Diamond and Janet Jackson helped keep him alert as he pushed his IROC to its limits.

Somehow, he managed to make it on time. After a quick change in the dressing room, the announcer introduced him in the same manner as every night he performed.

“Gentlemen and ladies, all the way from the Cape, our very own, Fuckman!!” Gus flowed onto the stage like a slinky, the catsuit stretched tightly across his massive pectorals, his genitals exposed to the mostly male audience. The red cape tied around his neck flapped behind him, blown by overhead space fans. It gave him that superhero look. A big, yellow “F” was stuck on his chest between the nipple holes, and a half mask hid his true identity. He moved and slithered and flexed for them all. Money rained on him like manna from heaven. He felt so alive on the stage, so complete with the suit on. He had many fans in the audience at the Blue Oyster. One was a teenage girl from the burbs named Allison. She was a small girl, small and pretty. Cute. She hated being called cute. She sat in the audience and watched silently, drawn in on herself, afraid to touch the table or even the sides of the wooden stool she sat in. But Fuckman kept her sitting attentively, her big, blue, puppy dog eyes looking up to his firm, manly physique. The sight of him stirred her maturing womanhood, and it fought with the feelings of guilt she had for being in the club. The dangers and risks she took to be here sometimes aroused her, even frightened her, but her father’s dirty magazines weren’t enough anymore. She wanted to explore, to see all those things in the flesh, and the farther away she was from home doing something like this, the better. After several more minutes of ogling, Allison rose and moved quickly out of the club.

As with every night she visited Fuckman, the walk to the parking garage and the trip through the city to the burbs was stressful. To complete the Fuckman ritual, Allison climbed back into her bedroom window, changed into her pajamas, and went to the kitchen for a popsicle. She never worried about waking her parents, they slept like logs after a few pitchers of dry martinis. Selecting banana, she unwrapped the pop and returned to her bed to pleasure herself to visions of Fuckman until the wooden stick was all that was left. The freezing cold felt so absolute in her that there was no doubt it was happening, she was alive.

In this way Allison kept herself alone. Alone until she met Merle. Merle was about her age, she figured, a year from graduating. He was tall and handsome, with black hair and blue eyes. Just like Fuckman.

But for all his looks and his cool, he acted awkward and unsure of himself every time Allison bought fudgicles or popsicles from him at the refreshment booth of the theater where they worked. When Allison told Merle what she wanted him to do to her with a popsicle, Merle stood staring at her with his mouth agape. Somehow, (Merle would later attribute divine intervention) he managed a weak affirmative response.

At first, Merle was as nervous utilizing the popsicles on Allison for pleasure as he was selling them to her for comsumption. Possibly moreso. But soon, he had her climaxing before the popsicle melted, and that was the real trick to it. Even when he finally convinced her that his penis was a protein-flavored popsicle of sorts, Merle couldn’t believe he found a girl this weird. It got to the point where she was making him put condoms on the popsicles, to make it “safe, refrigerated sex.” She was something right out of Penthose Forum. Just when he’d been ready to give up on finding a girl who liked sex, Allison came along.

They moved onto other frozen treats, and by the time they reached banana fudge bombs, they knew it was love. In her small, cartoon-like, sqeaky voice, she ordered him to get rid of the other girl that he was seeing, Shery. Merle was apprehensive about breaking up with Shery, she was a nice girl. He’d even go so far as to say he loved her. She really loved him, too. But Merle was almost graduated and he still didn’t have any good sex stories to tell in the locker room. He wasn’t a good enough liar to make anything up. Down deep he knew it was the wrong thing to do, but after a lust-filled evening with Allison involving a Ben & Jerry’s Peace Pop, whipped cream, and hot fudge sauce, Merle broke up with Shery. Allison was just too crazy not to be real, he had to live her reality.

Shery was crushed. She had known that Merle was upset about the sex thing. Shery wanted to wait until she knew what she was doing enough to make it special for both of them. She’d been reading books for months in preparation. Now Merle was leaving her for another woman. It had to be a woman. A woman who knew what to do in bed.

Depression set in. Shery would just lay around in her room, compose dreary poetry in Spanish and listen to The Cure and Ministry tapes until late in the evening. She missed Merle so much, his blue eyes, his black hair, the way he smelled, the way he used to touch her. She went around her room, finding little things that reminded her of Merle: ticket stubs from concerts and movies they’d gone to, letters he’d sent her, pictures of them together, unwashed clothing with his smell still on them, soda cans he’d drank from, a toothpick he’d used. She turned all the items into a sculpture that she just stared at and cried in front of. The items reminded her of Merle’s physical presence, it made her breathe heavy and feel tingly. Their love had been a very tangible, physical thing that she could feel. Now it was gone.

Her friends tried to get her out on blind dates all the time, but none of them made her feel like Merle had. She always found herself comparing the guy to Merle, to that feeling of vitality he’d always given her. She was beginning to think she’d never find something tangible and real again, something that made her feel alive.

Then one day she found Rick. It was at the Mr. Bungle show at Axis. Rick had been wearing a skirt, and due to the fact he’d worn no underwear that night, had poked Shery’s butt cheek during “Love is a Fist.” He’d been tripping. While the incident caused initial shock, Shery recognized, at that moment of collision between penis and cheek, the feeling that Merle used to cause in her. That and the fact Rick had been so sorry about the accident made her talk to him. He didn’t look like Merle. He was straightforward and had a million stories to tell.

It was love at first sight. Rick couldn’t believe that Merle had left Shery, she was beautiful and intelligent and actually wanted to go out with him and have a monogamous relationship. Besides, how many girls could understand you poking them in the butt cheek with your dick? To top it off, she read some crazy books on sex that had diagrams and everything. Rick preferred a book with pictures. After finding Cynthia spanking some tall, gorgeous blonde in his dorm room one day, Rick was ready for a normal heterosexual relationship. 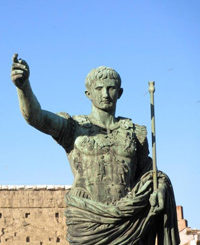 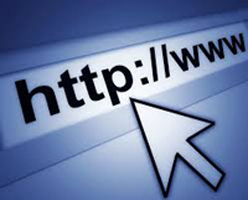 The Sirens of Cyber – Column

Rage Against the Cubicle – Fiction