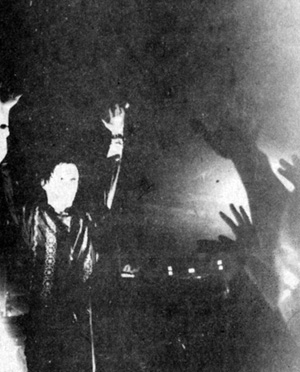 With all the precision a brutality of a high tech assassin, Chemlab, the technokill evil geniuses do their damage. Rat-trap size stage aside, Jared and his crew pummeled the dark denizens that infested Venus de Milo one evening in May. Chemlab proved technology, metallic punk, and insane dance grooves can mix live as swift and sure as a death contract.

Jared was a charismatic menace who writhed around the stage in black and let loose his distinct growl (enhanced nicely by distortion). The guitarist and synth-demigod ground out their melding of raw monster guitar and jet-scream synth fury. Add live drums and another axe wielder, and Chemlab’s struck like a sonic A-Team.

This being my first feast of their tech-core stew, I didn’t know whether to expect corpse-like figures churning out art-rock or neo-headbanging, industrial slampit mayhem. Chemlab proved to be the latter. With songs from their most recent testament to high-tech carnage, Burn Out at the Hydrogen Bar, Chemlab reproduced in the flesh the devastating intensity the achieved in the studio.

Take a taste of their auditory narcotic and you, too will become a Chemlab junkie. If you’re looking for just the right kind of cathartic fun, mainline the live Chemlab fix. But if you get hooked on their high-tech rage, just don’t blame me!

The Gotohells – with Tunnel Rats, The Cretins at The Rat – Review