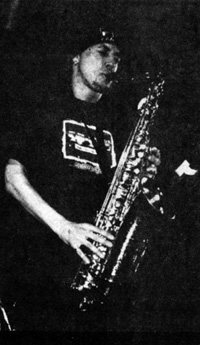 at Axis
review and photo by Rich Rodichok

After half an hour of watching the Tuesday night crowd shuffle into Axis, I became confused. Jeff, Fat Bag‘s DJ/scratch master, had told me they’re a jazz-funk-rap-rock kind of thing. The people filling up the club were not what I expected to see at all. Not one to frequent the dance clubs, I was still able to deduce that these people were probably there to dance to a DJ, not to see a band.

As part of the show, Jeff warms up the crowd by spinning his own hip-hop selections, and then bleeds his last track right into the intro to the band’s first number. All of a sudden, there are nine guys on stage, laying down the fattest groove I’ve ever felt. Super-funk drumming with percussion on the side, jazz guitar, stand-up bass (gotta love that), records scratching, three ethereal saxophones ,and a trumpet. Now that’s FAT.

Lead singer/rapper, tenor sax player Alex played his double role with ease, switching back and forth throughout each tune, his spoken rhymes as smooth as his jazzy riffs. This band is so surprisingly tight after just a handful of local gigs that improv solos and freestyle full band jams flow flawlessly in and out of the basic song structures. 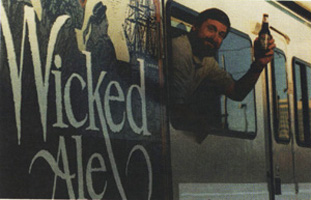