with Melting Hopefuls, Orbit at T.T. the Bear’s
by Elisabeth A. Parker

The Melting Hopefuls have a buzz going on, especially since Spin has mentioned them as a hot up-and-coming act. The songs project a bouncy pop veneer subverted by subtly odd instrumental interplays. And the two guitarists will do anything – even lie on their stomachs on top of their guitars simultaneously – for just the right feedback. Lead singer Renee LoBue delivers intelligent lyrics in cooing, throaty tones edged with underlying menace. Her stage presence reminds you of that cute, wholesome, preppy chick you knew in high school who one day, for no apparent reason, lit the cafeteria trashcan on fire. They have a tape out now called Space Flyer on Big Pop and their old label, Shanachie (which, oddly enough, mostly handles folk music).

What does Orbit sound like? Try splicing The Smiths and The Pixies and playing them at 45 rpm. Vocals range from pre-orgasmic whine to primal scream against twangy, frenetic instrumentals and tight drumming. Orbit is a three-piece, but they get maximum mileage from their sound. The bass and guitar play synchronously most of the time, which is generally considered a music “Don’t,” but Orbit makes it work.

Sirensong closed the night on a more mellow note (pun not intended but left in anyway). Vocals ring in chime-like tones against an instrumental backdrop awash in breezy syntho-trip sounds. 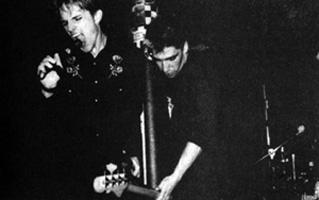 Everclear – at Babyhead and Local 186 – Review