Led by punk diva in waiting, Mary Timony of Helium, the women ruled the opening festivities of the 1995 Loud Music Festival. The three-day guitar rock extravaganza kicked off on a Thursday with 22 bands working five different rooms over the course of six hours.

Helium was the buzz band of the night, filling the downstairs room at Pearl Street with eager, attentive fans. Guitarist Mary Timony, dolled up in a silver sequined skirt and pink leotards, was the undisputed queen of this rock prom as she plucked away at her six string, moaning and lilting all the while. There is a little girl sadness in her voice that comes through crystal clear when she laments “my heart is not a sports car.” Backed by bassist Ashe Bowie and drummer Shawn King Devlin, Timony, wistfully droning like one of the Go-Go’s on Valium, enraptured the crowd of 200 plus with her whimsical voice and dire guitar work. Using their just released CD, Dirt of Luck (Matador), as a spring board, Helium vaulted into the vibrant “Superball,” “Trixie’s Star,” and closed the show with the punk ballad, “Lucy.”

Coming in a close second to Timony’s star-making performance was singer/guitarist Mary Lorson of the New York City-based Madder Rose. Less dramatic and far less subtle than Boston’s Helium, this quintet put some spark in a relatively tame night at the Center For The Arts. Looking like a female version of the Black Crowes’ Chris Robinson, the rail thin Lorson led her chargers on a 45 minute rock-edged romp.

The evening kicked off at the Pearl Street club as Portland, Oregon’s Everclear, struck the first loud chord at 7:30 PM. Meanwhile, the Baystate Cabaret hosted Sydra, a Boston-based trio that was all decibel, no direction. Local favorites Amanda’s Dirty Secret raised the stakes as they raised the volume, and offered an ample sampling of their debut CD, Pluto (Play Hard), while also taking the 45 minute window of opportunity to try out some new material.

Another female-fueled outfit, Dirt Merchants, continued the loud theme at Pearl Street, adding some brooding vocals by singer/guitarist Maria Christopher. With such startling performers as Christopher, Timony, and Letters to Cleo’s Kay Hanley, one has to wonder what they are putting in Boston’s water supply.

The North Star was relatively quiet as the Northampton based Pirate Jenny, their name beaming proudly from an on-stage Lite-Brite display, entertained a crowd of twenty fans. The 9 pm crowd at The Center For the Arts (all five of us) was treated to a private showing of Rake’s Progress. The five piece, roots-oriented band was a refreshing surprise that most people missed. The New York-based band fought through a horrible sound mix to deliver a solid R.E.M.-like set. Featuring vocalist Tim Cloherty, Rake’s Progress offered city life lyrics on top of melodic rock guitar on songs “Don’t Hate Me,” and “Howard Is In Drag.” A quick stop at The Brewery allowed a glance at Cocktail, a local ensemble featuring guitarist Joe Boyle leading friends in a set of “lounge metal.”

With tickets being dispensed from a dilapidated, one-room trailer on Pearl Street, the two closet clubs (Pearl Street and Baystate) benefitted with the best audiences. After the Helium performance, the crowd split evenly between Epic Records’ Shudder To Think set at Pearl Street and Green Magnet School‘s Dinosaur Jr. imitation at the Baystate. 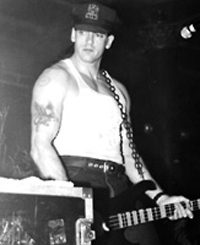 Slughog – with Slower at the Middle East Cafe – Review