The Voluptuous Horror of Karen Black

Remember Glam Rock back in the old days? When bands that were “Glam” were actually cross-dressing queens with guitars, and not cheesy metalheads in make-up whining about how much they wanted to get laid? When trash rock ‘n’ roll was actually FUN? Me neither, but I’m starting to be sorry I missed it.

Those who read last issue’s review of The Voluptuous Horror of Karen Black CD will know what to expect: Glitzy outrageous fun with a flair for the theatrical. Near-naked females in blue body paint and black teeth. Cardboard-cutout props. Lots o’ glitter thrown everywhere. An Oriental guitarist named Samoa in a nurse’s outfit. Lead singer Kembra Pfahler getting eggs cracked on her twat. Fun for the whole family.

The stage show was largely the same since their last Boston appearance, but this time around the songs were better. The audience was also larger than the last show, even though they mostly stood around like they had pickles in their asses. Perhaps because of this, the band played for a mere 45 minutes before exiting. And I doubt that Samoa got many fans when he said, “I like Boston a lot… But New York is better.” If NYC has more bands as entertaining as Karen Black, he may be right. 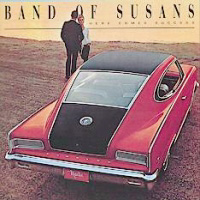