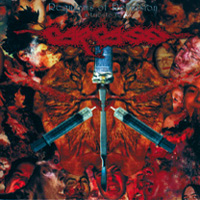 A Tribute to Carcass (Deathvomit/Necropolis)
by Tim Den

It’s about time! Carcass was one of the best and most inspirational death metal bands that ever existed, spawning worldwide imitators, even as they transformed from medical-dictionary-obsessed goregrind to prog-ish heavy rock by the end of their career. Their ferocious three (and later four) vocal attacks coupled with their (at the time) daring use of death metal melodies made them the most original band in the genre. Without Necroticism: Descanting the Insalubrious (gotta love their titles), there’d be no In Flames, Dark Tranquillity, At The Gates, or any melodic death bands. On Requiems of Revulsion, an army of bands pay homage to Carcass’ earlier material, noting that at least the mark was made. Keeping dead body collages on records: General Surgery, Regurgitate, Rotten Sound, Haemorrhage, Nasum, Cattle Decapitation, Exhumed, Disgorge, Machetazo, Necrony, Impaled, Pig Destroyer, Vulgar Pigeons, Bodies Lay Broken, Engorged, Dead Infection, Avulsed.
(PO Box 14815 Fremont, CA 94539)