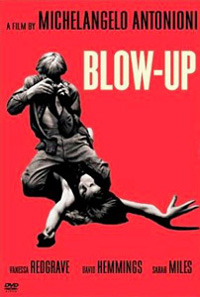 DVDs have served to remind the day to day geek what it was like when CDs first came into being. When they first arrived, people lamented the easy availability of worthless crap, when much of the media’s undeniable masterpieces went unrestored.

So it is that, until now, such pointless crud as a two DVD box set of the complete Pink Lady and Jeff TV show is available, but Michaelangelo Antonioni’s landmark work Blow Up was nowhere to be seen.

And not a moment too soon. Set in the morally numb pit of ’60s hipster London, Italian director Antonioni sought to illustrate the “fun”-seeking autopilot the then-current generation was running on. David Hemmings plays a photographer who may (or may not) have photographed a murder. Thing is, the picture’s not clear enough to say for sure, and none of his friends seem to be too concerned about it anyway. Feeling that he should do something, but lacking any moral compass or purpose that would tell him just what that something was, Hemmings floats around aimlessly, waiting for something to happen.

What makes Blow Up one of the definitive works of European cinema are the layers of meaning infused in this deceptively simple story. Is a picture of something really proof positive that it existed? The decadence of “nothing matters” morality is shown to be its own punishment: If Hemmings gave a shit about something, anything, then he wouldn’t be so confused as to what to do. Entire papers have been written about Blow Up‘s layers of meaning, and many more could be.

The film is not perfect, however. Hemmings’ detached facade at a Yardbirds show, for example, looks to modern eyes more like one spoil sport’s bad attitude, rather than the condemnation of a generation’s pointless volume it was clearly intended to be. There are other minor holes as well, but the message still retains its true power, particularly in the media-fueled mass chaos of war we’re currently in. It also doesn’t hurt, of course, that the ’60s Mod/retro feel is as potent as ever, and that Herbie Hancock’s brilliant score has aged beautifully. No true film geek should be without this one.
(www.warnerhomevideo.com) 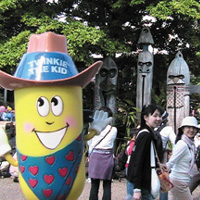 Standing In The Shadows of Motown – Review