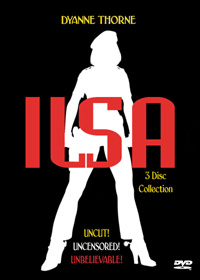 Anchor Bay continues to impress me with their commitment to bringing us uncut exploitation films that other companies are too gun-shy to unleash. Not only do they release the films, they go out of their way to get the uncut versions with quality extras. This is a definite bonus for sickos like myself who feel ripped off if we miss two seconds of censor-trimmed debauchery and gore. One of Anchor Bay’s recent triumphs is the release of their bundle of joy entitled ILSA . This box set contains three infamous films starring Dyanne Thorne, the giant-jugged mistress of mayhem. These are the types of films most normal people seek to ban for their constant depravity, perversion, and sadistic scenes of violence. These are also the types of films I was constantly striving to view as a teenager. Luckily, some clueless video store clerk allowed me to rent two of the three films included, so I had a thorough background on Ilsa before reviewing this set.

I remember renting She Wolf and Harem Keeper like it was yesterday… The crappy video quality, lots of boobies, and even some full-frontal glimpses, the torture, the blood… oh my. Needless to say, I found both films quite disturbing. Now, two decades later, I see the films in a whole new light. They seem almost comical in the way they proceed from shock to shock. While most may feel offended by many of the scenes, I find the heavy-handedness of the offensive material rather funny. Another noticeable difference that time has rendered is the impact of all the nakedness. When you’re 12 or 13 years old, breasts are breasts, and you’re just pleased to see as many as you can. Now I find myself thinking “whoo… that person needs to put some clothes on, quick!” Don’t expect refugees from the Heffner mansion to be running around in these Ilsa films. You’re more apt to be reminded of that nice lady down the street who walks all those dogs. If you ever wondered what she looks like under her nightgown, well, here she is, baby. I must say, however, that Ilsa’s body does still hold up as a monument to full-figured women. She still looks pretty good, even by today’s standards. Perhaps that’s why she enjoyed the title role… because not too much stock is placed on acting ability in these films. Yet, for some strange reason, they remain compelling viewing. These are fun flicks to watch. 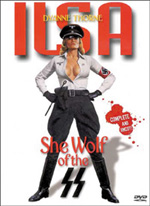 The first film included is She Wolf of the SS in which Ilsa plays a fearsome but hot Nazi commandant in the waning days of WWII. Ilsa is running some bizarre experiment on the naked female prisoners where tolerances to pain are tested. Electrodes on nipples and maggots wriggling inside wounds and numerous other nasty bits abound. In her down time, Ilsa likes to have sex with the male prisoners, none of whom seems to satisfy her. After literally giving her their best “shot,” they’re all castrated for being inadequate in the sack. This continues until Wolfe shows up and wows Ilsa with his ability to keep his cork from popping. Has she finally found her dream prisoner? Are her torture experiments getting out of control? Yup. Even the Nazis are scared of Ilsa, so it’s no surprise that when an uprising breaks out, everyone wants to take revenge on her.

The image transfer looks great (with a few minor blips), and is presented in widescreen. There’s also a fun commentary with Dyanne Thorne, director Don Edmonds, producer David Friedman, and humorist Martin Lewis, as well as a trailer and talent bios. 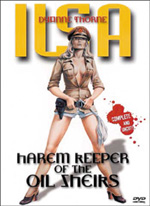 The second film included is Harem Keeper of the Oil Sheiks in which Ilsa is in charge of a female white slavery ring. She works for El Sharif, the leader of a Middle Eastern country who prides himself on having lots of woman to have sex with. Ilsa is also in charge of training the Sheiks hotties to better please him… especially with their tongues. Ilsa has some back-up this time in the form of Satin and Velvet; two deadly women who get their kicks beating the crap out of men. Unfortunately for the sadistic gang, two American diplomats are visiting, in the hopes of securing oil for the U.S. and sex from Ilsa. They’re planning to blackmail El Sharif to get the oil, but the tables turn, and Ilsa is put in the position to kill her new lover. Instead, she teams up with him to destroy El Sharif, but things go awry when Ilsa shows her true psychotic nature. Harem Keeper is packed with sex, nudity, torture, and even an exploding vagina, of all things. You also get a trailer, talent bios, and the audio commentary with stars Thorne and Maurer, and director Edmonds. 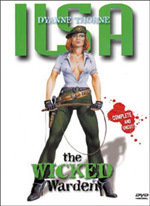 In the film, Ilsa is the warden in charge of a jungle prison for sexual deviants. This is basically an excuse to provide her with victims to torture. When outside folks grow suspicious, a spy is planted and summarily gets to witness the true virtues of torture herself. The film looks great, and I actually may’ve enjoyed it as much as the original, even though this is the first time I’ve ever seen it. The pin-cushion sex scene with Lina Romay is a real corker. Apart from the widescreen presentation, you get the trailer, talent bios, and the audio commentary with stars Thorne and Mauer. To really create quite a night, attempt to watch all three films in a row like I did. I’m still reeling from the good times.

Elite Entertainment has also recently put out a couple of notable releases. The first is Uzumaki (translated as “Spiral”), a live-action Japanese nightmare with English subtitles. The basic story concerns a town that becomes obsessed with spiral forms. Slowly, the whole town goes insane with tragic results. This film is more fun to look at than to try and understand. The widescreen presentation comes with behind the scenes features and interviews.

Also from Elite, check out The Double-D Avenger. It revels in big-breastedness (don’t we all?). It’s a real corny camp-fest that rescues some of Russ Meyer’s breast actresses from retirement. Crime fighting and cheesy jokes fly with reckless abandon. And if the movie itself isn’t funny enough for you, check out the hilarious yet insightful commentary by none other than Joe Bob Briggs. 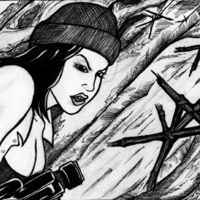