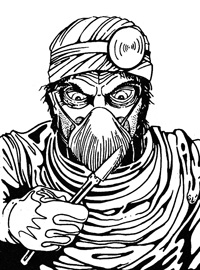 Good evening. Welcome to the Academy Awards of Splatter Movies. The only variance that we make is that you will choose the winners. That’s right!

In a few months, you will find a ballot enclosed so that you can cast your vote.
This issue’s nominations are for: Best Use of a Hypodermic Needle.

1) SLAUGHTER HIGH: Vengeful nerd Marty Rantzen haunts his fellow
geekoids and slaughters them one by one at their class reunion. In the film’s denouement, Rantzen switches places with a nurse who is attempting to inject him. When the doctor rushes in to investigate, Rantzen pivots and plunges a
very large needle deep into the Doc’s tear duct. OUCH!!

2) THE FLY II: Seth Brundle’s little boy has plenty of reasons to thank dear old dad. To begin with, Seth Jr. ages abnormally, has very few friends, and will one day transform into a huge, drooling, nasty-ass fly monster. So much for The Wonder Years! A scene early in the movie has the youngster getting an injection in the forearm. The nurse cannot seem to tap the right vein, so as she wriggles the needle, it snaps off in the kid’s arm. SQUIRT!!

3) DEAD AND BURIED: Potter’s Bluff is a quaint little town in which all of the inhabitants are bloodthirsty, undead butchers. The opening highlights include a photographer being repeatedly pummeled, stabbed and then burnt crispy. In fact, the only inch of him that is not charcoal is his left eyeball. A wild-eyed stare embedded in a full-body bandage. The sap’s luck sinks to an all-time low as the ever-so-helpful nurse strolls in and plants a great big needle plunger deep into his gaping orb. GAAAHH!!

4) OFFERINGS: A mutant boy escapes from an institution to cut up his former playmates and offer their facial pieces to his childhood girlfriend. Makes Van Gogh seem like a puss! On his way out of the loony bin, he decides to off a nurse and plunge a hypo in her forehead. To add fun to injury, he pulls up the plunger and fills the chamber with brain fluid. ICK!!

Following are the first three entries in the SICKEST SCENE competition. Each issue, this catagory will accumulate entries until the voting takes place. Before voting, I suggest you check out these scenes for yourself. They are all deemed hazardous to your gag reflex. The nominees are:

1) THE SPIT-UP INTESINAL TRACT from GATES OF HELL (Directed by Lucio Fulci).
Yes, that’s right! A woman becomes possessed by a demon/priest that causes blood to run in rivulets from her eyes. Next, we are treated to the sight of loop after loop of small intestine and other stomach yummies pouring forth from mouth to lap. Slowly. In tender, loving detail.

2) THE DOG-BITTEN CHICK from THE BEYOND (Directed by Lucio Fulci)
The white-orbed blind girl sics her German Shepard on unwelcome, undead visitors only to have it turn on her instead. Unable to defend herself, the dog manages to rip out the girl’s entire throat. Blood spurts like water from a hydrant on a hot city day. To top things off, the dog circles around to the right side of the girl’s face and munches yet another gaping hole. More slow motion. More fancy, fluid filming.

3) THE HEAD TO TOE ENEMA from BAD TASTE (Directed by Peter Jackson)
Derek, one of the few surviving humans, loses his marbles and single-handedly attacks several alien foes with a chainsaw. In one surprise ambush, Derek saws through the ceiling and soars down majestically, chainsaw first, into the skull of one of the fugly E.T.-on-a-bad-day-looking monsters. Derek then burrows all the way through the body and out the hiney-hole amidst a steady stream of blood, guts and various chunky waste products.

Stay Tuned For More Entries In The Sickest Scene Category!!!

Worst New Film: CHILDREN OF THE CORN II
A truly unnecessary film! Supposedly, the handiwork of the youngsters from the first film has been discovered and the adults are now back in control. Yup, all 15 parental facists of Gatlin. Additional expendable characters include a tabloid reporter, his rebel son, and their counterpart bimbos. That’s when what passes for plot unfolds. For some inexplicable reason, the goofy-looking cult leader is possessed by falling into an endless fire pit, disintegrating into liquid gobules, and reformed again. This scene is merely to show off the latest in computer “morphing” techniques. Gratuitous girlfriends, gratuitous plot (if you can call it that), gratuitous monster mask… in short, yawn!,who cares!? It makes the first film seem like a timeworn classic. Hopefully by the time you read this, CHILDREN OF THE CORN II will be banished to the dusty back shelves of local videostores waiting for teeny-boppers that never saw the original and folks who think it’s a documentary on farming.

Most Promising New Film: DEAD ALIVE (directed by Peter Jackson)
Fangoria Magazine promises that this is the GORIEST FILM EVER MADE! As if that weren’t enough of a recommendation, also consider that it’s supposed to be funny as hell and directed by the genius who brought us BAD TASTE. Keep an orb out for it because it will be released unrated (possibly NC-17).