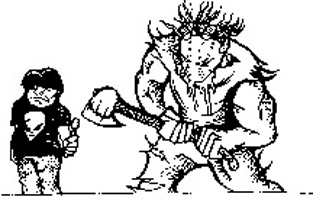 When the leaves and the candy corn turn brown and orange, you know it’s once again time to hit the haunted house circuit. In case you are considering a venture (or have taken one) to Spooky World Halloween Theme Park, let me tell you my experience. Armed with wife and family I set out on a two hour drive to find a two mile line of cars blocking my spooky entrance. To amuse ourselves we rolled down all the windows and screamed “Spoooookkyyyy!!” at innocent people walking by. Then we parked and walked (for a while).

Luckily, we’d paid our huge sum of money in advance and already had tickets to get into (yes!)… another line. The cool thing about our new line is that you have to stand the whole time. After three hours in this freezing hell, my eyes began to glaze over at the multitudes of whining kids sporting nasal icicles and candy apple residue in their eyebrows. I turned around at one point to find that one little tyke was stuck-solid face-first to my butt. The absolute scariest part of the night was listening to Tiny Tim live in concert for one of the last times. I feel badly now because he died shortly thereafter but he was looking and sounding none too good, I tell you. Almost as bad as Tiny was when they opened up the stage for audience participation – some members of which chose to sing songs by Garth Brooks and Dolly Parton. The line was transformed into Loser Night at the Karaoke Corral. For me, the only thing as bad as country music are the people who sing it.

We finally made it to the Haunted Hayride which was pretty cool. It was suitably dark and my fellow victims jumped into hysterics at everything (even squirrels). Along the trail were small skits that showcased makeup and gore effects. Spurting arteries are always dandy for the five-to ten-year old crowd. I must admit, however, that there was a sublime moment when the fog machines were cranked and you couldn’t see crap. All of a sudden, as the mist dissipated, I found myself kisser to kisser with Jason Voorhees who quickly revved up a chainsaw and pretended to disembowel me. Following the ride, we were led to the Haunted Barn which was no more than a series of twists and turns through… get this.. . some rooms! Occasionally there would be someone hiding around a corner to cop a cheap feel off the girls. Spooky World should have paid us because we screamed at everything and nothing (my bro is a junior in college but he squeals like a 6th grade girl scout). For completists there was also a souvenir shop with overpriced posters and “Scream Queens” who get paid handsomely to chat with people like me. If you so desired, you could also fondle a large assortment of nasty insects and snakes. My sister held a scorpion for some stupid reason. Shortly after that an employee forgot to secure the parking brake on his golf cart. I realized this when it ran my sister over. We should have sued for some free spooky passes. This year, SpookyWorld has changed the attractions to haunted dungeons and you may be lucky enough to catch Linda Blair or the guy who plays Jason in Friday the 13th. Final Verdict: There is fun to be had if you make it yourself (but don’t bother driving as far as we did).

Final movie warning: If you plan to go see The Game starring Sean Penn and Michael Douglas, you’d best check your feelings about “coincidence” at the door. Those of you unable to will spend the entire running time clutching your genitals and whimpering for it all to end. The film’s premise is that Douglas plays a rich business tycoon/loner/ jerk and his brother (Penn) buys him an entertainment package. The package is a series of elaborate distractions that seek to bring out the adventurous side in even the most feeble of us. When things become deadly, the audience grows confused – is this a game, a robbery, or just a messed-up nightmare? You won’t believe what really is the case, but it makes for a highly entertaining film. Check it out. 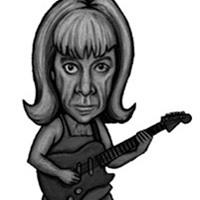 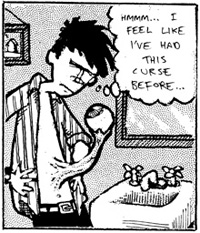