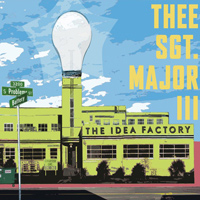 I recently invoked the name of Kowalskis’ singer Laurie Anderson on this site when writing about Donora’s eponymous review. Though I wasn’t exactly comparing Donora vocalist Casey Hanner to Anderson, more the band itself to Kowalskis (though their voices are somewhat similar), when it comes to the Laurie Anderson sound-alike sweepstakes, Thee Sgt. Major III lead singer Leslie Beattie takes the cake. Blondie, fun, Ramones, ’60s girl groups, garage. For adherents of the above, you will probably like this. While Thee Sgt. Major III’s debut The Idea Factory (antecedent band Sgt. Major had most of the same players, but a different singer) is poppy as all get out, you may wonder why a guy who just turned 50 like former Fastbacks leader Kurt Bloch is still pumping out juvenile, sugary rock at his age. And his guitar asks himself exactly that through Beattie’s voice on “What Am I Gonna Do?”: “They want me just to get a job and go there every day/Save some money for the future and then I’ll be okay.” Neither Bloch, Beattie – likely none of the four band members – seem to have an answer, but ponder this most indie rock existential query like all lifers do: They keep playing tight, fun music and say to hell with the question.

Either by happenstance or kismet, I’ve just finished reading We Never Learn, New Bomb Turks’ singer Eric Davidson’s oral and written history about hard-to-place and (mostly) minimally successful garage and trash punks. A very good read… and guess who’s mentioned? Kurt Bloch, and while Bloch isn’t implicated in any of the tome’s plentiful raunchiness, when it came to producing the Devil Dogs’1994 Saturday Night Fever, singer Andy Gortler claimed he “really did know his shit.” Reading about the ins and outs of that under-inked scene (and, to be honest, calling it a homogonous scene is a bit of a stretch; more a collective of revved-up retro, weird, and really weird) also gives the reader a little insight into what might’ve inspired the lyrics to “What Am I Gonna Do?” (Guess who else is mentioned? Lollipop‘s own Craig Regala, who put out the New Bomb Turks’ first recordings on his Datapanik label, and has since, in his own words in the book, “went metal.”) These bands certainly weren’t in it for the money, but at least one former Fastback made the leap to superstar. And if you’re reading this site, I probably don’t have to tell you who. Let’s just say this tall blonde had a rather explosive drinking problem in Paradise City at one time.

There is no ground broken on The Idea Factory, but none is attempted, either. Fun, fun, fun, probably even better live with your beau and a few Coronas or Pabsts down the hatch. But if the house of ill-repute in question serves up cotton candy, you better skip it or you’ll likely bounce off the walls, losing a few teeth in the process. And your lover better be strong and not partake as readily, because when the concert’s over, you’ll need help to get moving again, the sugar crash and accumulated bruises wiping you out.

Opener “As I Do,” a song about megalomaniacal tendencies, features a snippet of distorted guitar in the beginning that’s very similar to a riff in Weezer’s “Lullaby for Wayne” (and I’m sure countless other garagey and punkish songs), but it’s only a tease. The following song, “Ice Cold 10,” is a catchy-as-hell slab of punky pop that alludes to the Ramones and name-drops Bettie Page. “Help is on the Way” ends with a one-minute solo, part of which would fit in with any fine-tuned ’80s hair metal band, but overtop a tranquil bubblegum rhythm. The solo itself ends with an understated blast of feedback: Odd and interesting. “New Painter Man” rips off the Angels’ “My Boyfriend’s Back” and turns an already-sugary classic into a surfeit Slip ‘N Slide with guitar, like nearly everything Thee Sgt. Major III touches. “Everything is New” is a cute duet between Beattie and Bill Coury (who was once co-vocalist in the band), though the fact that he sounds like a chick may be disconcerting to some: Kinda ruins the visuals. And it’s also the song that best shows off Beattie’s cutesy sass; it’s like she’s affronted to have to share the stage with anybody, let alone a softie like Coury. You may need the wifebeater to hang with her persona. And despite Bloch’s sub-punk licks on some tracks and ferocious drumming by Mike Musburger throughout, this slower number may be the record’s best song. Another contender for best in show is “The Forgotten Three,” another slower song; it really shows an appreciation for Blondie. Most of this album just blurs by.

It comes down to this: If you like Ramonesy, candy-coated neo-garage pop and can hack Leslie Beattie’s register for long periods (which may depend on what mood you’re in), you’ll probably like this record, maybe a lot. Even if you don’t, short doses of it will get you moving – maybe to turn it off, if anything. Yes, The Idea Factory can get monotonous at times, but who said life’s easy?
(www.sparkandshine.com) 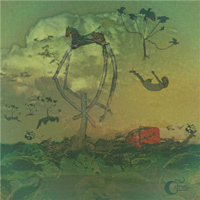