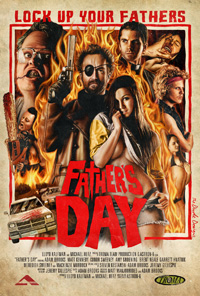 The glorious poster art for the Troma-produced Canadian cheapie Father’s Day promises great things. Forearm-sized pistol barrels, bloody chainsaws about to get licked, heaving cleavage and daisy dukes – I had to grab my VHS copy of Andy Sidaris’ Malibu Express off the wall just to view some art that oozed comparable machismo. Luckily, the movie delivers on the grindhouse promise of its poster, and with more style than so many of the post-Grindhouse imitators that have the low budget but none of the heart. A motley crew comprised of a timid priest, an eye-patched vigilante, and a back-alley trick-turner named Twink is assembled to track down a serial rapist/murderer of fathers. There’s plenty of gore on their quest, but the focus is more on humor, with some sharp black comedy and laughs by way of frequent nods to famous movie scenes. A Machete-style fake trailer halfway in for the Z-grade Star Raiders is also a winner. The filmmakers have a great time with colors and lighting throughout, as well as an eye for memorable locations (an abandoned water park is the highlight), giving the movie a consistent, memorable style, even when bloodthirsty killers are biting off cocks. Look for the DVD release details soon.
(www.troma.com) 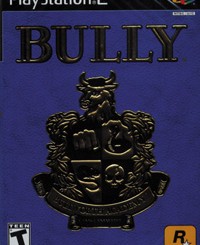