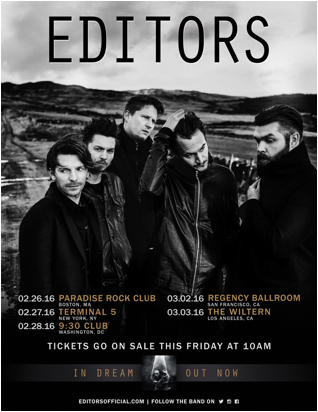 Editors tour US after six-year absence

Editors announce their first US shows in six years, with a limited run of five dates across February & March 2016. The band, whose sell out UK tour reiterated their continued presence as one of the UK’s biggest and most vital musical forces, continue their extensive live work in support of their breathtaking new album, In Dream.

Billboard recently premiered a video for ‘Ocean of Night’ from their Top 5 UK album, In Dream.’ Ocean Of Night’ is one of three tracks on the album which feature vocals from Slowdive and Minor Victories Rachel Goswell, the first Editors tracks to feature any voices from outside the band.

In Dream has seen Editors gather praise for an uncompromising and stark artistic statement, leaving behind the straight rock of previous album “The Weight Of Your Love”. It is the second album to feature the “new” line-up of the band with Justin Lockey and Elliott Williams firmly in place alongside founding members Tom Smith, Russell Leetch and Ed Lay. After two years of global touring this five piece incarnation used the new album to stretch the Editors sound, swerving away from the rock dynamic of “The Weight Of Your Love” and marking a return to a writing process influenced by electronic music. In Dream is out now via  Play It Again Sam and available to buy digitally and physically.

You can catch Editors stunning live show when they play the dates below. 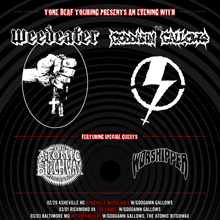 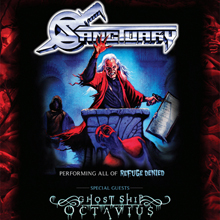