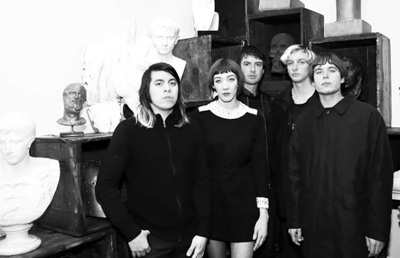 “It’s the hymn of a disgruntled generation searching for, and waiting for, an epiphany that can only come from within.”- Flaunt Magazine

“The track draws instant comparisons to Depeche Mode and The Cure in my head.”- Paste Magazine

Guitarist Alexander describes the making of the video…

“‘Black Monday’ is a simple and straightforward song. We originally imagined the video to be the same. We pictured normal people caught up in their mundane struggles, and a fairly linear plot. We came up with a story wrote a script and showed it to our bandmates. They all seemed to like it but some of them thought something was missing. We all agreed that we were way too weird to have a video full of cliches and regular happenings.

We decided to make a more dangerous video one that is both surreal and relatable. We made a character with a double life. With dreams and reality folding in on each other. Lately we’ve been really inspired by film makers like David Lynch and John Waters, we wanted to make a video that was hopefully as dark as one and as ridiculous as the other.

We got together, painted our apartment gold, threw glitter on the walls, bought fog machines, invited 50 people over to our 1 bedroom apartment, and sweated together in a record-breaking heat wave while listening to “Black Monday” on repeat. We turned our living room into a nightclub, and setup our equipment. We pretended to play music for hours and our friends we’re dancing so hard that our telephone broke and chandelier fell from the ceiling. The evening’s absurdity was captured on film and everyone left by 3am.

That night we fell asleep on the living room floor, all of our furniture was crammed into our tiny bedroom. Jade and I we’re covered in metallic confetti and glitter. The house was completely annihilated. We looked around in awe at the gigantic mess. I think that’s sort of what you can take from the video: sometimes in order to be yourself or breakaway from a routine you have to do something crazy, sometimes you have to be crazy to be yourself at least that’s what the world has been telling me.”

Taking from the book of Factory Records era post-punk, “Black Monday” is an incredibly dark yet, catchy slice of synth-pop. Vocalist / guitarist Alex Galindo explains, “‘Black Monday’ popped into my head, and it seemed to be the perfect two words to capture my feelings at the time. I was depressed, completely uninspired from my day job, and felt trapped. I wanted to make a really dumb and simple pop song with a lot of repetition and only a couple variations floating around. It’s sort of a metaphor for the constant flow of uncreative non-liberating work most of us find ourselves doing.”

Drinking Flowers originated in Orange County. Shrugging off the shackles of surf and garage, they quickly moved to L.A. and within a few years established their own pop underground with a couple of washed out EPs. Most notably the transitional, Shadow Show, whose cover art saw a collaboration with Vice News artist Alex Schubert.