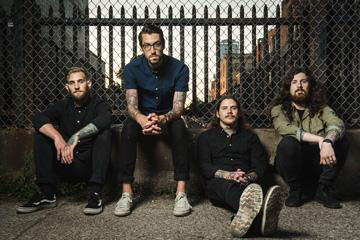 The Devil Wears Prada get bluesy on new album

It follows last year’s Space EP that bowed at #18 on the Billboard Top 200 and earned widespread acclaim from the likes of Alternative Press and Loudwire.  Upholding a career-long tradition of progression and perseverance, the group’s new record represents another natural evolution.

The band retreated to both Watertown, WI and Sawyer, MI last winter to write Transit Blues, for the first time living and creating in a shared, full time space.  They re-teamed with Space producer Dan Korneff (Pierce The Veil, Motionless in White) in the Spring of 2016 to record the 11-track Transit Blues.  Overall, the album reflects themes of transition, separation, and mourning.

“It’s like zooming out on a commute,” explains Hranica.  “It’s the notion of getting from one place to another.  Most people go from their homes to work while we go from date to date on tour.  Either way, it’s the inevitable process of growth and change.  There are moments of anger, but the pervading theme is separation.  Drawing the full circle, it is separation that is inherent in moving from one place to another.”

Last week, The Devil Wears Prada unleashed the first single “Daughter,” and it racked up nearly 270,000 views in less than a week.  A marriage of metallic elegance, punk immediacy and sweeping alternative, the track nods to a passion Hranica has yet to properly write about:  literature.  Specifically, it takes a page from Simone de Beauvoir’s novel, The Mandarins.

“It’s strange,” smiles Hranica.  “I will write EPs based on subjects that aren’t super close to my heart like Zombie or Space because it opens the door for me to make my own stories based off the topics.  When we did Transit Blues, it was only natural to incorporate fiction.  ‘Daughter’ is the most forthright example.”