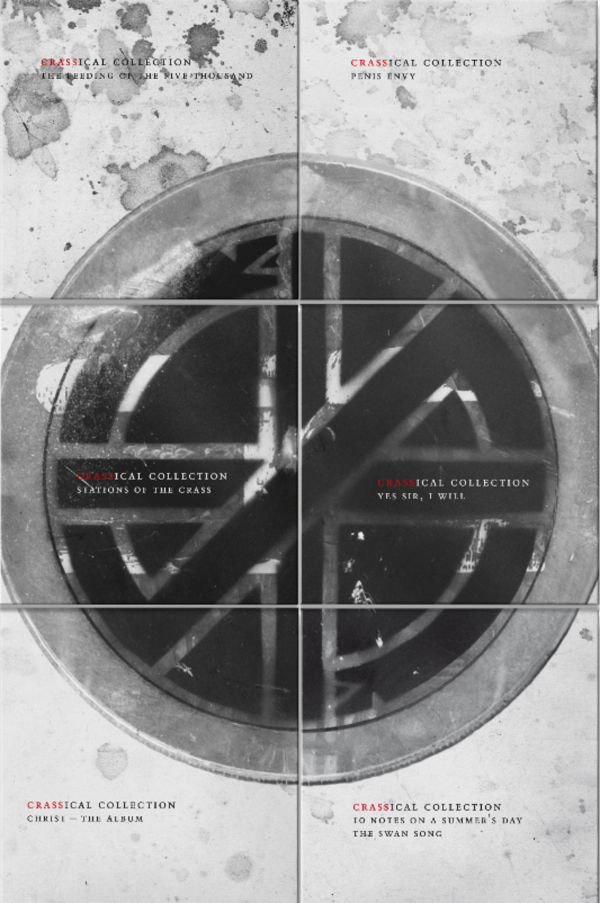 One Little Independent Records has revealed details on the Crassical Collection, a collection of seminal avant-punk collective Crass’ legendary albums, restored from the original analogue studio tapes.
Set for release in North America on October 30, the Crassical Collection includes Stations of the Crass (1979), Feeding of the Five Thousand (The Second Sitting) (1981), Penis Envy (1981), Christ – The Album (1982), Yes Sir, I Will (1983), Ten Notes on a Summer’s Day (1986), and Best Before 1984 (1986). Each of the records have been repackaged and bolstered by rare and unreleased tracks, and stunning new artwork from Gee Vaucher, who has lovingly created what could only be considered a true artifact.
The first six albums include two CDs, with the first disc being the main album remastered by Alex Gordon at Abbey Road Studios and the second being a mixture of rare live and remastered studio recordings. Each package also includes a fold-out poster and a high-quality 60-page booklet featuring all lyrics, along with extensive liner notes from band members Penny Rimbaud and Steve Ignorant, which shed light on the making of the records.
The Best Before 1984 Crassical Collection is brand-new, and has also been remastered and features five fold-out posters and a 52-page booklet.
“Number seven – the one that almost got away,” Crass’ Penny Rimbaud notes. “This final Crassical Collection double CD re-mastered by Alex Gordon and Penny Rimbaud at Abbey Road Studios in 2018 contains the original album plus a further album’s worth of related material; good, bad, and indifferent. Half the band want it out, while the other half wanted out, but hey, here it is in all its glory.”
Pre-orders for the seven releases are available now via Amazon (see below for direct links).
Leading up to the release of the Crassical Collection, Crass has embarked on the ambitious The Feeding of the Five Thousand Remix Project. Beginning in late 2019, Crass took the step of making the original separate track stems of their seminal debut album, The Feeding of the Five Thousand, available as a free download. With a call to take the original 16 track recording in its pre-mix state, the intent was for people to create their own remixes and interpretations and breathe fresh life and ideas into this revolutionary music. 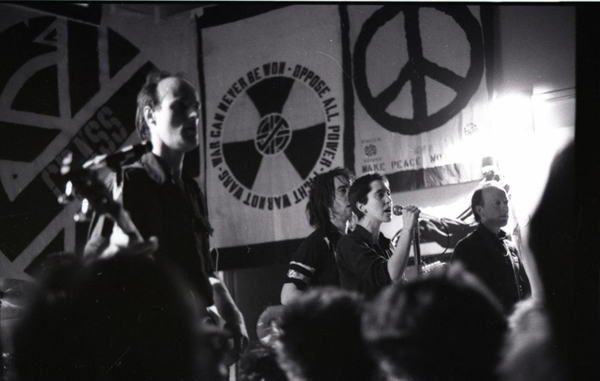 The resulting Normal Never Was series has just released its third installment, featuring remixes by legendary producer Steve Aoki and Japanese outsider musician Mikado Koko. All proceeds from the Normal Never Was series are being donated to the Refuge charity (www.refuge.org.uk).
“Different genre, different world, but common ground,” Rimbaud told Rolling Stone, which premiered Steve Aoki’s remix of “Banned from the Roxy.” “Steve’s contribution to the remix project defies the divide and rule notions of the governing classes and brings us together in a vibrant scream for liberation.”
Aoki added, “Remixing the legendary band Crass was a big honor for me, and when they told me the proceeds from the remix would all be donated to a Refuge to help women in need, my answer was an immediate yes. There’s a lot of people and problems that need our help and attention in this world, and I only hope that the money raised by this remix project helps to unfuck some of it.”
Watch the video for Aoki’s remix at https://www.rollingstone.com/music/music-news/steve-aoki-crass-banned-from-the-roxy-remix-1046805/.
“Mikado Koko is a ground-breaking Japanese artist and musician stretching the boundaries of feminism and the avant-garde,” Rimbaud told Vive le Rock!, which debuted Koko’s “Asylum” remix. “No wonder, then, that she was drawn to remixing ‘Reality Asylum’ and thereby proving the universality of the liberationist cause.”
Check out the video for Koko’s remix at https://vivelerock.net/crass-remix-project-stage-3/.
Normal Never Was III is  available digitally at https://open.spotify.com/artist/0fchjvjsXNVrxJ98kdPxYX. Physical copies of Normal Never Was III will be available October 16. Pre-order now at https://www.olirecords.com/shop/crass/normalneverwas3/.
The first two sets of remixes Normal New Was I and Normal Never Was II are available at https://crass.lnk.to/normalneverwas and https://crass.lnk.to/CrassNormalNeverWasII, respectively.
Join Rimbaud and Aoki for a livestream chat via Instagram Live on Monday, August 24 August at 4 p.m. EDT/1 p.m. PDT.
In addition to the Crass releases, Rimbaud’s latest solo record, HOW?, also dropped last Friday. HOW? is available at https://oli.lnk.to/How. 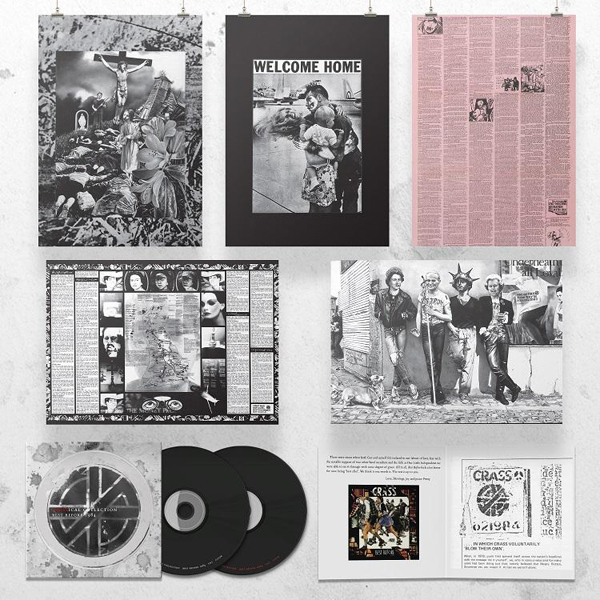