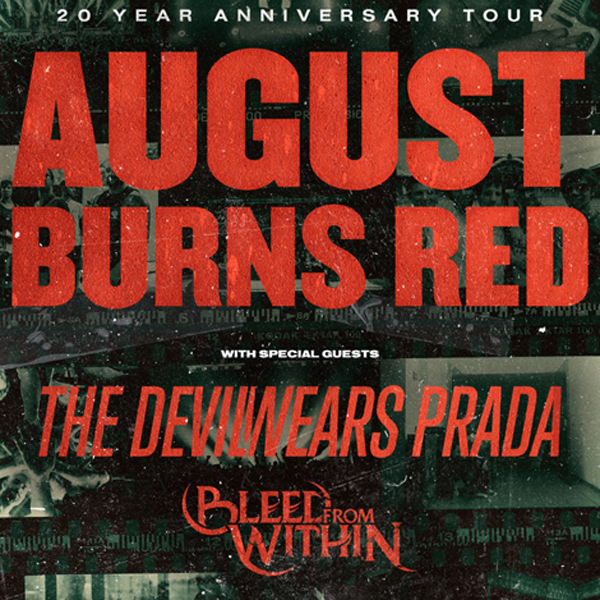 Grammy-nominated Lancaster five-piece August Burns Red — JB Brubaker (lead guitar), Brent Rambler (rhythm guitar), Matt Greiner (drums), Jake Luhrs (vocals), and Dustin Davidson (bass) — have a big year ahead of them in 2023. The band will drop its new album, Death Below, on March 24 via SharpTone Records. Pre-order it here. ABR have also announced its 20 Year Anniversary Tour, during which they will play material off all nine of their albums as they hit North America.“Where does the time go?,” says Brubaker. “I can remember playing 250 shows a year and touring in our van like it was yesterday. We are so grateful to have had the support of our fans year in and year out for two decades. We thank you, and cannot wait to celebrate with you!” The first leg of the tour kicks off on February 15 in Silver Spring, MD and runs through March 14 in Charlotte, NC. The second leg launches on April 13 in Philadelphia, PA and wraps on May 12 in Quebec, Canada. The tour marks the first time the band has played Canada since 2019. The support acts are The Devil Wears Prada, and Scottish band Bleed From Within, who are touring the US for the first time. The bands will appear on both legs of the tour. VIP packages are on sale right now at this location and include an exclusive, 200+ page photo book that spans each year of ABR’s entire career.  Tickets on sale now. 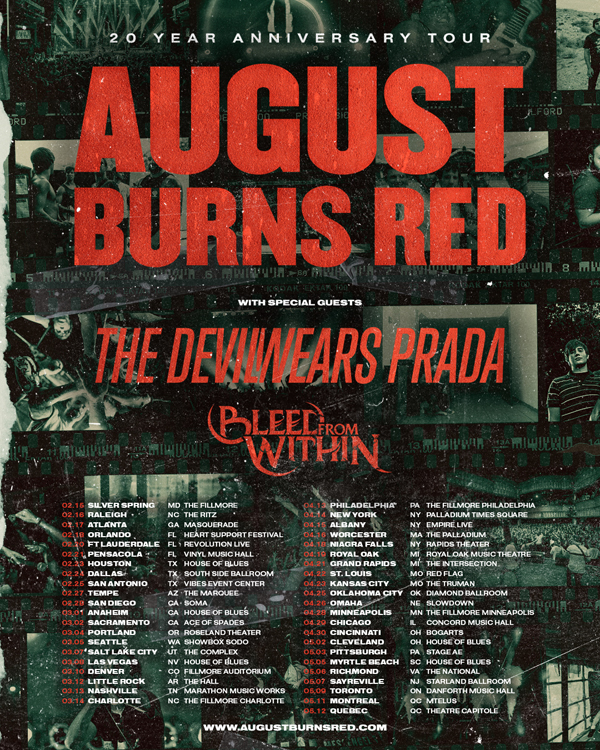 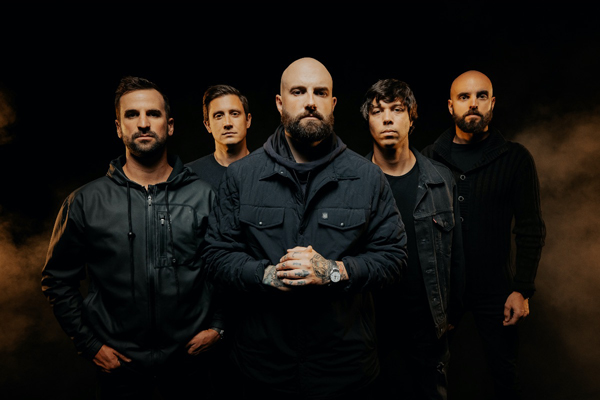 About August Burns Red:August Burns Red is likely the only metal act ever described as “thrillingly empathetic” (Kerrang!). It’s a testament to the ferocious band’s ability to recognize and connect with the mixture of brokenness and hope found in their audience and within themselves. A hard-working collective with a shockingly stable lineup for the vast majority of their career, August Burns Red pour every ounce of themselves into their music. Atmospheric, riff-laden, aggressive bursts of controlled chaos, filled with shifting time signatures and tempos, deliver confessional, self-reflective, and authentic emotion. Tour stops with Lamb of God, Killswitch Engage, Parkway Drive, and Bring Me the Horizon; several major international hard rock festivals (Rock Am Ring, Download, and Aftershock, to name a few); and the Vans Warped Tour are among the destinations around the world to witness ABR’s live prowess. Massive headlining treks celebrating 10-year anniversaries for Constellations and Leveler demonstrated the enduring relevance of the band’s catalog, nearly 20 years into ABR’s storied career. 2020’s Guardians debuted at No. 1 on Billboard’s Hard Music, Rock Albums, and Vinyl Albums charts.  Revolver, who put the band on their cover the same year, observed August Burns Red “embrace the pain so well.” It’s a truth never more evident than on Death Below, their stunning ninth studio album. Recorded with longtime producers Carson Slovak and Grant McFarland, Death Below encompasses all of the pissed-off strength of the band’s past without sacrificing an ounce of catchy, melodic might. Death Below boasts guest appearances from ABR allies Jesse Leach (Killswitch Engage), Spencer Chamberlain (Underoath), Jason Richardson (All That Remains), and JT Cavey (ERRA). “It’s getting difficult for the members of August Burns Red to keep one-upping themselves,” marveled Billboard shortly before Guardians arrived. With Death Below, they emerge victorious again.

We Came As Romans grow up on new album – News