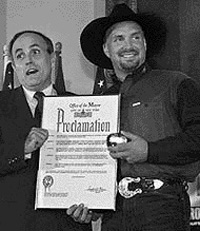 The city of New York eager to show the world that people can congregate in Central Park without being stabbed, raped, or otherwise violated.

A friend said they reminded her of Rage Against the Machine, but I think that was only because of their energy, more like some of Fishbone’s harder stuff.

I’ve never see a band keep a crowd going for so long, has so much energy, and is still so damn tight. They played most of their ska stuff towards the end.

The guy had a better body than I’d seen on any lead singer in a while, the letters “INSECURE” tattooed across his stomach. Oooh, boy.