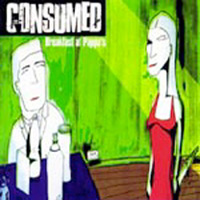 Fat signed these guys before they even had a single out. Nottinghamshire, England’s Consumed’s debut.