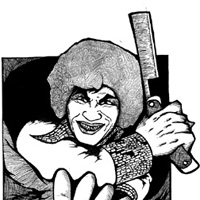 The plan was to provoke Alex to attack them so that they could kill him justifiably in defense. The premise is stupid as hell… but I love it.