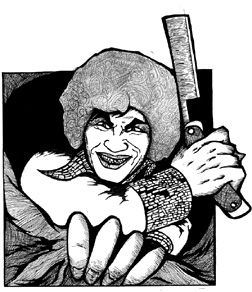 A Time to Kill?

Ahhhh… the summer goes by quicker every year. I have to say, the best horror movie of the season was Saving Private Ryan. Few films have had the unbridled gusto to turn voluminous arterial spurting into an art form. No kidding around, the graphic war effects were flawless and plentiful – not a movie for the young ‘uns. However, the best ending to a summer movie easily goes to Halloween H2O for its tender – “hands off, dickhead!” – decapitation finale. A real howler.

Getting back to a theme from last issue: When is it OK to kill someone? Imagine some dirtrag murders someone you love. Are you justified in murdering them? If so, just how much enjoyment should you partake before guilt sets in? These are the gripping ideas offered up in the following film.

House on the Edge of the Park is a major sleazefest that begins with psycho David Hess (Alex) simultaneously raping and choking a young girl to death. We then cut to a 20-something couple pulling into a mechanic’s for a quickie repair. Guess who works there? Yup, Alex and a gorked-out disco dork named Ricky. These two gems somehow fix the car and then invite themselves to the couple’s party… but not before Alex pockets his straight razor. At the bash, a small group of yuppies amuse themselves by making fools out of Ricky and Alex. This turns out to be unnecessary because Ricky immediately does a provocative (and highly stupid) strip-tease like nobody’s business. This scene is so lame that it alone is worth twice the price of the rental. Meanwhile, Alex is busy trying to get laid by some hard-to-get cutie who leaves him standing naked and alone. Alex soon catches on to the rich folks’ scheme during a heated (and fixed) game of poker. He decides he’s had enough and starts to beat, rape, pee on, and torture everyone in sight.

After 45 minutes of sheer debauchery, Ricky (the retarded one) begins to feel that Alex has gone too far. Most viewers would have said so much earlier than this nut. Unfortunately for Ricky, his bud Alex gets royally pissed off and squeezes Ricky’s balls. Then, adding insult to injury, he flays Ricky’s stomach wide open with the straight razor. Feeling remorse for having butchered the only moron on the face of the Earth who would be his friend, Alex lets his guard down long enough for one of the male victims to pull out a gun. In an awkward dialogue segment, we learn that the whole party was a setup. The girl Alex had raped at the beginning of the film was actually the sister of the gun-toter. The plan was to provoke Alex to attack them so that they could kill him justifiably in defense. The premise is stupid as hell… but I love it. Anyhow, Alex is then slowly shot to pieces as his victims either watch intently or try a shot for themselves. The shot Alex takes in the groin sparks a slow motion scream that must be seen twice to be fully appreciated. He then falls into the pool just in time to be peed on and to receive his final, fatal gunshot wound. Alex is left to float in his own grue while pal Ricky bleeds to death on the living room floor next to his newfound woman?!

They just can’t make ’em like this baby anymore. Check it out. 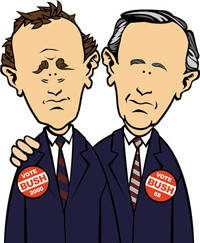