There is debate as to whether or not this triumvirate of albums (Pornography, Disintegration, and Bloodflowers) was an intended trilogy, or a coincidence. 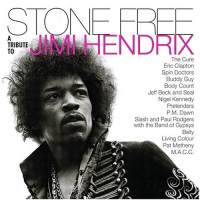