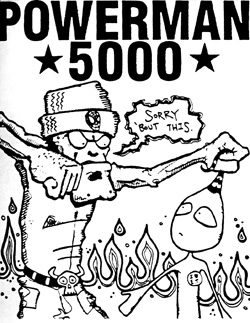 with 6L6, Stompcrotch at the Middle East Cafe
by Scott Hefflon
photo by Chris Johnson

You see a star-studded line up like this one – 6L6, Stompcrotch, Powerman 5000 – you go to check out a great show. You stroll in (or stagger, as the case may be) only to discover it’s a birthday party for some girl named Jill and it seems like everyone knows everyone else. People glance at you, there’s little to no flicker of recognition, and then they scan the crowd again to see if Buffy of Hildigard have shown up yet.

You feel like an intruder in your own scene and write a self-righteous pep talk notation to yourself: “Hi, I’m Scott from Lollipop and I want nothing to do with your fuckin’ clique!” You even underline it and add a few more exclamation points like the wounded pompous ass you’re being.

The show rocks hard as you jot notes to yourself (even though you know you’ll not be able to read them by the time you actually write up the show). A few people ask you what you’re doing and they’re cool, so you’re cool back. It turns out that you’re familiar with a few people there and you even figure out Jill is the person in charge of local consignment at Tower. You say hi, she says hi. Instant rapport. (Yeah, right.) The point is, if I actually must have one, is that Boston’s scene has a reputation of being aloof, incestuous, and cliquish. That’s from the outside looking in. From the inside, it’s a tight community. If you read how the press portrays this Generation X thing, you find that our friends are our families. They’re our support group and our community. A little advice: Your arrogant, judgement-passing, loner rebel stance will only lead to bitter isolation. Everyone’s got a different trip; just relax, groove with what’s going on and ride their ride for awhile. You can offer up your own ideas and people will probably groove with them and ride with your trip awhile.

This barstool philosophy session brought to you by our overtly prolific, ever insightful/inciteful Editor. These ramblings do not necessarily represent anything or anyone other than the writer at the exact moment it was written.

Yo, do believe the hype. With only three members, the 6L6 guys (note: All guys now that Gina is out and Jon is in) sledgehammer the audience like some four or five piece outfit can’t. With Ted bashing the glitter off his emerald green glam-boy bass, roaring like a 20 foot Lemmy monster and leaping all over the damn place like a pissed off hardcore juvenile delinquent, you know the party’s just begun. New guitarist, Jon, proved his guidance counselors (and Berklee professors) wrong by jumping in on short notice, learning the material in a week, and thundering megachunk riffs on his battered SG. The third perpetrator in the audio assault is George, the bash meister. (George is also a Berklee D.O. It probably goes to show something!?) George rampages on the kit from Helmet stomp to Nuclear Assault speedcore. To quip that 6L6 “raged” would be unsubstantiated journalistic lingo. They deserve more and, dammit, if they have to rend and destroy everything in their way to build it back their way – they will. Even their signing to a small “band friendly” label (Summit) and fighting their way up is admirable. Their songs focus on the everyday encounters that beat most people into normality and show the hurtful, thoughtless themes hidden inside the actions. The lyrics are printed in all lowercase without punctuation, which is significant in itself. There is some seriously eloquent pissing going on here but I refuse to clip quotes out of context. If you haven’t gotten the point yet – this is a must get.

Yes, it’s that ever popular Stompbox cover band from wherever it is they spawn these “tributes.” Like a rejected Bud endorsement, these boys posed up a storm, spit beer on as much of the audience as they could, and literally rocked the house. They jammed like veteran musicians, although the singer did use lyric sheets. (So did Sid Vicious, so what doesn’t that prove?) The singer roared majestically and looked like the De-gen. gas station attendant our parents warned us we’d end up like. He reminded me of Ted (from 6L6) wearing a hat and shades, but it could’ve been the drugs. The guitar and bass produced a huge, stompable wall of sound. The guitarist looked suspiciously like Darrel (from Head Cleaner) and the bassist like Mike (from Heretix), but that too could have been the drugs. The drummer, Led Zephyn, looked like, whaled like, and repeatedly knocked over his cymbals just like the real drummer of Stompbox. Wow, what a likeness! Yes, the GQ gutterboys of Stompcrotch are back! Check your Boston Phoenix Band Guide for more information. 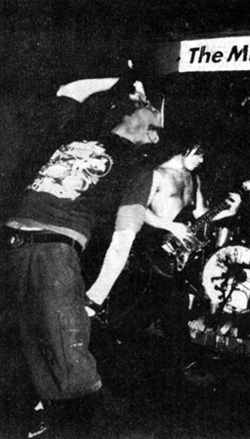 For the new crew of funk/rap/metal bands – meet your mentors. Despite the lack of press Powerman 5000 have gotten, they draw one of the largest and most devout followings in the city. Right from the opening, they got the crowd swaying and bouncing off the beer-sticky floor. They built from a singing bass line to a chill repetition of a phrase, caught the groove, then blasted the patented fluid rap-a-long, wah-saturated scream and ten ton guitar sound of PM5K. With a sauntering bass minstrel rather than the standard show off slap-happy approach, a superfly guitarist that came from an opposite upbringing than the metal-gone-funk trend and a singer (M.C. Spider himself) that has the triple time trips, the hardcore roars and the chill pill smoothy raps; you know you’ve got just too many damn variables to cook up a clever one liner to describe this band.

To top off, the beats are brought to you be the duel performances of drummer boy extraordinaire, Al, and percussionist-of-ambiguous-responsibility, D.J. Brian Collymore. (The D.J.’s attributes seem to include whistles, cow bells, woodblocks, rototoms, maraca, assorted unplaceable sounds, smiling, and hoggin’ the bottle of Jagermeister.) Frontsman M.C. Spider has won more awards than I’d care to plug, but with his booming barrage of rapfire as well as his fluid stage presence (even before the Jager started flowing), it all seems well-earned.

Powerman 5000’s 5 1/2 song demo, A Private Little War, is now available at shows, Tower, and other fine music outlets. The band photo on the inside sleeve is by Rich Rodichok, who did the mellow shot for issue #3. Hopefully we can arrange some real coverage for a band of this worthiness later. Promises, promises. 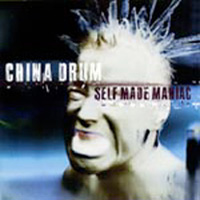 China Drum – Self Made Maniac – Review 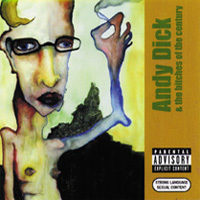 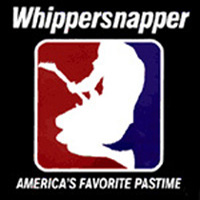