at The Middle East Cafe
by Jeff Carnivale

Donning their fetching, new, matching outfits of silver, leather pants and glittering sequined shirts, the Dambuilders played a rousing show at the Middle East. The band apparently splurged on new clothes with the advance from their new, full-length Imago release, Encendedor.

The new garb, as well as the quartet, sparkled through an energetic set. Starting with “Copsucker,” a fast-paced ditty highlighted by Joan Wasser’s maniacal screaming, the band mixed material from the new album with old faves. The only interruption was a brief one when a less-than-sturdy connection between Wasser’s smokin’ violin and amp came loose.

Lead singer, Dave Derby, provides a strong bass line, although on this particular night, his vocals were, at times, murky. With Kevin March’s drum work, the pair make a formidable rhythm section. March is undoubtedly one of the strongest drummers in town. Meanwhile, guitarist Eric Masunaga and Wassar, sporting her golden fiddle (won from the devil or Charlie Daniels?) dueled for leads.

Make no mistake about it, it is Wassar and her screeching electric violin that distinguishes this group. On occasion, the foursome allow one another to showcase their individual talents, but the Dambuilders are at their finest when everyone is wailing together. That’s when the bodies up front really start flying. Their rendition of “Louisiana” was the best evidence of their energetic style and was the perfect way to end the set. 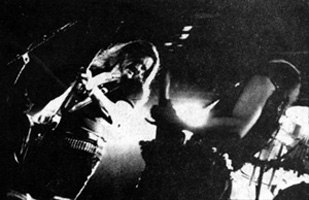 Spring Heeled Jack – with The Toasters, The Hi Hats at Mama Kin – Review