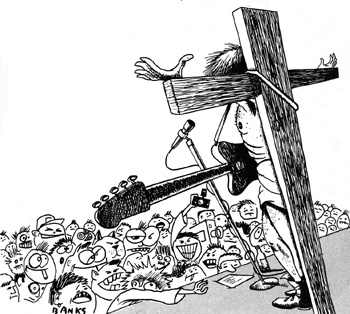 Charles Bukowski was arguably the best street poet that this country has ever seen. He wrote millions of brilliant words about the true human experience, he told his stories in the glaring, unvarnished truth of his own language and he attempted to please no one with his work. He is still virtually unknown (for a small insight into this great man, rent the movie Barfly).

When he died, his obituary summed him up as a vulgar skid row alcoholic. I love the corporate media.

Kurt Cobain was a visionary; a pristine songwriter and artist in the truest sense of the words. Not since John Lennon has a musician been capable of summing up the human experience in such a simple and communicable way. This was the torturous curse that he lived with, and died with.

To be such a brilliantly talented artist, to see through people and life as if it were all encased in glass, to be so delicate and vulnerable emotionally and to be blown around like a leaf in the wind by massive circumstances swarming around you, was no doubt a more painful existence than the record-buying public can understand. Being in a chronic state of physical pain with stomach problems, alienated by your bandmates, married to a psychotic on the other side of the world, traveling alone on a shitty bus in a shitty place without a person around who can be considered a friend is not the glamorous lifestyle we might be envying. Kurt was alone in this world from the day he came into it.

Grunge was not the product of Seattle bands. The familiar sound we call “Seattle” was created over 20 years ago (take another listen to Neil Young’s “Cinnamon Girl”). I did not jump on the “Teen Spirit” bandwagon, and I foolishly passed over my friends’ insistence that I immerse myself into an album called Bleach by some Seattle band called Nirvana. But being a lifetime sucker for pop music, when I first heard Nevermind, I was floored. This was the sound for which I had tolerated an entire decade of vacuous ’80s music in hopes of one day hearing again. And the songs! Jesus, was Lennon back from the dead? For weeks that became months I listened to almost nothing else. I was so inspired by this record that I started my first band in years after swearing I was out of this shit business for good.

But the more I listened to what Kurt was saying with his songs, the more I heard the haunting loneliness and desperation of his lyrics and voice. I knew then that this man was not long for this world. In Utero only confirmed my feelings. It almost seemed to me that he was wrapping things up. The song “Dumb” told me convincingly that he didn’t know how to be happy, but longed for this feeling (“I’m not like them, But I can pretend…”). I understood this message, and when we saw the tour, I could feel the waves of hatred, confusion, pain, power, angst; a choir of volatile emotions screaming from this frightened man who was chosen to be God for us all, but reluctantly declined the crucifixion.

When my best friend called to tell me, I wasn’t surprised, but I still felt a part of me die that day.

Artists like Kurt Cobain come along maybe once every ten years. Be glad that we got to share him in the prime of our lives. Celebrate his music and his vision and let it inspire you to create yourself, in whatever way you know how. This would be a fitting eulogy. But please don’t judge him. There is not one of us who can possibly know what the experience of another person is, or what it’s like to live in the confines of their thoughts and emotions.

“I feel guilty beyond words about these things… I’ve tried everything in my power to appreciate it, and I do. God, believe me, I do… But I still can’t get out the frustration, the guilt and the empathy I have for everybody. There is good in all of us, and I simply love people too much. So much that it makes me feel too… sad…”

I will remember Kurt Cobain for the way he enriched my life and wonder at the sacrifice it was for him to do that.