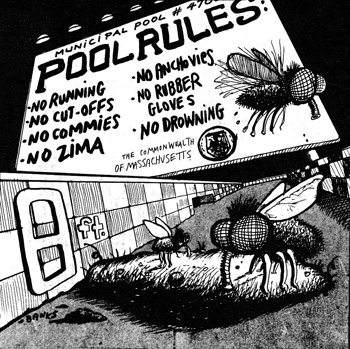 Imagine if you will that you are sitting in a living room with the temperature at a nice toasty ninety-five; the humidity has your lungs working like a pair of forge bellows and the only source of moving air is from a fan that your mother’s mother left to her in the will. You’re laying on the couch practically naked, deeply involved in some ancient sitcom that you’ve had a burning desire to see for the past six months… Suddenly, you are rudely awakened by an obnoxious voice singing, “Water Country…” and a screen filled, not with Jethro’s hunky body and country-boy smile, but with a bunch of children in speedo trunks with dabs of green goo stuck on the tips of their noses screaming in apparent ecstasy as they plunge down a device known as “The Black Hole.” Unfortunately, it spits them out at the other end.

Water Country, the epitome of mid-America. How quaint. How very… whitebread. So I went.

The first thing I discovered was that Water Country is located off route 95, not 93 North and every extra mile in a truck made for three and seating four is pure hell, even with the windows down. Along with this discovery was that of never again making the mistake of inviting cousins from abroad along. What kind of idiot asks for a chocolate donut at McDonalds? Fortunately, they weren’t my cousins. But getting there was only half the fun.

Our wonderful mid-American oasis is located on the edge of an industrial wasteland with just enough grass separating the two to qualify as a safe zone for small rodents. If one actually has enough energy, they can climb to the top of the Polaroid Shooter and look out at a scene straight out of a Mad Max movie. All this before plunging into the Shooter’s gapping maw for a fifteen second ride of pure, tube gripping horror only to be thrown out into a chlorine-filled catch basin for all of us who have always had a desperate need to re-live the moment of our birth. Only this time in fast-forward.

After skillfully avoiding the expanded kiddy play area, we made our way to Adventure River. This is how the ad described it: “A ride with something for the whole family, tube a quarter mile river…, with water falls, giant fountains and caves.” What they fail to mention is that every waterfall is skillfully placed to soak the unsuspecting tube-rider to the point of drowning, the giant water fountains come out of nowhere with the intensity of a wide-open fire hose blasting you into oblivion, and the caves? I saw a few rock bridges that in some obscure way might have passed for caves… like a cat could pass for a dog. I was not fooled. But the absolute worst thing about this innocent-looking river had nothing to do with the actual ride; it was this obnoxious little sign that informed all blue tube riders (blue tubes meant that you were either too poor or too cheap to spend five bucks on a yellow tube) that they could enjoy the wonders this river had to offer one time only. Blue tube riders had to, upon reaching this sign, relinquish to the next unsuspecting fool their sturdy little vessel that had just taken them through a quarter of a mile of hell. By the end of the ride, the tube and I had bonded. We felt as if we had just been through a war together. I never realized that separation could be so painful. Needless to say, my friends and I immediately went and purchased our very own yellow tubes, which signified that we were neither cheap nor poor but genuine mid-American up-and-comers with cashola to spare.

Double Geronimo. The name alone should have warned me away. It’s said to be the fastest water slide in New England. I had my doubts – advertisers tend to exaggerate – but in this case, I would have to make an exception. From ground level, the Double Geronimo looks a little scary, just enough to make you doubt yourself and try to come up with a lame excuse as to why you can’t go down this particular attraction. But not enough so that your friendly roommates and cousins couldn’t sweet-talk you into doing it all in the name of fun. After only a brief hesitation on your part, you climb the stairs, comforted with the knowledge that four year old children seem to be coming out of the ordeal relatively unscathed. Then you reach the top. You are surrounded by snotty little kids who claim to have ridden this ride ten times already. You look back at the expanded kiddy play area and begin to think that soggy diapers aren’t so bad after all. Your oh-so-supportive roommates are patting you on the shoulder and telling you that if a little kid can do it, so can you. You notice their maniacal smiles and suddenly they look like jackals. You begin to wonder if they really are pissed off about the Budweiser that mysteriously disappeared from the refrigerator two months ago… Meanwhile, the ever-so-kind and wonderfully college-student-stuck-with-a-stupid-summer-job attendant is telling you to lay on your back and cross your ankles… then shoves you over the edge. The last thing you see (before catching just enough air to scream something a touch more explicit than Geronimo!) is the attendant’s psycho killer grin as she sends yet another fool to their symbolic death.

After experiencing the fastest water slide in all of New England, the rest of the park seemed like an oasis. I had conquered my fear of small children being braver than myself as well as my fear of death, all in the same day.

No visit to Water Country would be complete without a visit to New England’s “largest and most exciting wave pool.” I must confess that the thought of plunging in amongst a billion little kids and their “I never get out of the house” mothers did not in the least bit appeal to me. But like the expanded kiddy play area, I had been going out of my way to avoid this particular attraction, not to mention the god-awful lime green astro turf that squished underneath your feet and was not the least bit beach-like in any way. But a little R & R was in order after going through my first symbolic death experience and there were a few empty spots up near the seven foot marker. (Thank God toddlers were not allowed past the four foot marker.) My first thought was to bypass all the little tykes and their “I need a tan for my reunion” mothers and dive off the edge as close to my pre-arranged spot as possible. Once again those little obnoxious all-too-wordy signs informed me that, just like the rest of the folks enjoying a wonderful day at Water Country, I had to wade though the riff raff of Mid-Americana before finding peace in the deep end. I won’t go into detail about my horror-filled journey out of the crowded shallow end. I know that at all times I kept within sight of my roommate and yelled to her on occasion just to make sure she hadn’t been swallowed up by the great kiddie-monsters lurking on all sides. After reaching the spot and climbing aboard my sturdy yellow tube, I sat back in eager anticipation; wave time was very near. I wrapped my toes around the dividing rope and smiled nervously at my roommate who was brave enough to float freely. I closed my eyes, thinking how nice it would be if only I were stoned… then all would be truly well and good in life. Floating there, toes firmly anchored, the wave pool, at Water Country, one of America’s best kept secrets… somewhere a bell rang. Wave time had begun. 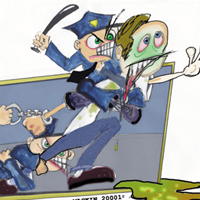 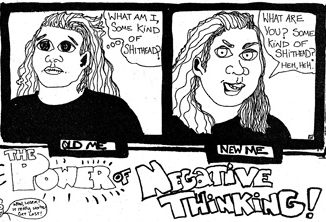 I Need These Things to Kill Me – Fiction