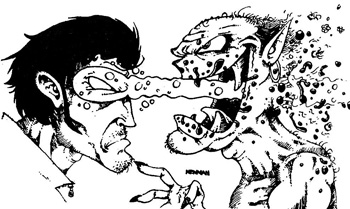 Maybe you’ve noticed I’m a little smaller this month, but please don’t think that I’m any less attracted to you. This is a summer issue and it’s a little smaller. I promise I’ll get real big again for you next time (pant, pant). So, due to the lack of space, let’s get to it!

Surprise, surprise, surprise! This time it’s the little big companies that really come through with some fantastic stuff and supply us comic fans with the quality we deserve. DarkHorse and Chaos are the companies of which I speak, and both make noble stabs at trying to fill the never ending void of corporate crap that constantly clutters the racks and shelves of our local comic shops. The Badger returns better than ever under the Darkhorse banner. The return brings us not only one, but two limited series of our favorite multiple personality character with an attitude. Kick’n butt and taking names is still Badger’s main goal. Now he’s teamed up with a crazy Druid that provides him with 24 hour psychiatric care and a place to stay. These two new books are written with interesting humor and strong plots that should put Badger back on the shelves monthly.

Chaos’ Lynch Mob is the other underdog book that comes out fighting the big boys like a real contender. Brian Pulido (of Evil Ernie fame) creates this superteam with a lot characters and just the right amount of attitude. The Mob is a group of mercs for hire about fifty years in the future who find themselves fighting a synthetic entity who escapes to 1994 with two hundred freelance superfreaks. (It sounds confusing mainly because it is, that’s one reason I like it.) Knowing that the past can’t possibly handle that many parahumans, the Mob sets off to ’94 with the slight thought of becoming heroes.

D.C. once again tries to put Aquaman (one of it’s oldest characters) back on the plateau that he was once on. The King of the Seas makes his comeback in an all new monthly series, brilliantly written by Peter David. I really can’t remember a time when I enjoyed an Aquaman story this much. I mean, the title actually has hope of lasting more than four issues. Nothing super-exciting actually happens in the first issue, but it’s a solid plot line that you know is going somewhere worthwhile.

Well, Batman gets the old thumbs down this month, which is a real shame since most of the past year he has been nothing shy of fantastic. The exciting build up of Knightsend comes to a completely anti-climactic ending. Reading the last issue was like gearing up to sex only to find out that your partner is impotent. Disappointing is all I can come up with to describe what should have been one of the greatest fights of all time. Next on the list of disappointing Batman stories is the graphic novel, Batman Dark Joker The Wild. This book is a perfect example of corporate crap. $9.95 is the going price for the soft cover edition (which is about right cause there’s nothing to get hard over) but make sure your copy is made of gold because that’s the only way it will be worth what you paid. The only positive aspect of this book is the fact that it’s graced with Kelly Jones’ art through out it’s interior. Unfortunately, not even that can save this generic cookie cut $tory.

Once again, Marvel manages to stay on top with its ever so popular X-titles and with good reason; the Phalanx Covenant story line is definitely promising. This story marks the placement of a whole new breed of X-men that will be quaintly titled after us, the twenty something crowd, better known as Generation-X or Gen-X. The Phalanx is a new lifeform made from the deceased New Mutant Warlock. Destined to conquer the universe, the Phalanx’s plans are found out by Prof X and you take it from there. This is probably the best way to enjoy superhero comics. It has a lot of action, tons of cool characters, good plot, excellent pencils and they put it on the shelf at a $2.95 and $2 cover so we can decide what we want to pay. Well, bringing all the X-teams together seems to be Marvel’s way of cashing in, but as long as they do it with style, I’m in. Till next time. 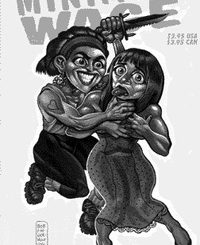 Graffic Traffic – Thank You Sir, May I Have Another? – Column